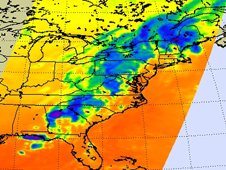 Infrared imagery basically shows temperature signatures. That means that scientists can determine how hot or cold something is by looking at something using infrared light. The Atmospheric Infrared Sounder (AIRS) instrument aboard NASA's Aqua satellite captured infrared imagery when it flew over severe thunderstorms in northwestern Georgia on May 27 at 07:17 UTC (3:17 a.m. EDT).

The infrared image from AIRS revealed a circular shaped area of thunderstorms over northwestern Georgia, with very high thunderstorm cloud-tops. AIRS data measured the cloud top temperatures to be as cold as or colder than -81 Fahrenheit/-61 Celsius. The rule with thunderstorms is that the higher the cloud top, the colder it is and the stronger the thunderstorm. These storms have the potential of dropping as much as 2 inches (50 mm) of rainfall per hour.

The image also showed a somewhat scraggly line of high thunderstorm cloud tops, indicative of the cold front those storms are a part of that stretch from northwestern Georgia up the western side of the Appalachian mountains to northwestern Maine. That line is moving east with the progression of the cold front on May 28.

The National Weather Service's Hydrometeorological Prediction Center in Camp Springs, Md. noted on May 28 "a weakening upper-level closed low over the Ohio valley will lift northeastward into southern Canada by Saturday. Showers and thunderstorms will develop along and ahead of the associated weakening cold front from the eastern gulf coast to the central Appalachians moving eastward to the mid-Atlantic and southward to the southeast."

The area on the AIRS imagery where the very high, cold, strong thunderstorms were located may have experienced a tornado. Chattoga County in northwestern Georgia reported damage from storms that may have been caused by a tornado. Chattooga County is about 80 miles northwest of the city of Atlanta. Today, the National Weather Service is investigating reported damages to determine if a tornado touched down. A small private airport in the county suffered damage to hangars and flipped planes, according to Channel 2, WSB-TV, Atlanta. The damage path began on Lookout Mountain and spread into the valley below, damaging homes, downing trees and power lines. Atlanta was not spared from severe weather from this system either. According to reports from Fox 5 television, Atlanta three people lost their lives from fallen trees. The National Weather Service reported golf-ball to softball-sized hail in Gwinnett and Fannin Counties. Power outages were reported in the Metro Atlanta area and in Dekalb and Clayton counties.

The AIRS instrument is one of several that fly onboard NASA's Aqua Satellite. With its ability to create three-dimensional maps of the atmosphere showing temperature, water vapor, and cloud properties, AIRS provides a unique view of the environment in which storms come to life. For more information about AIRS, visit: http://airs.jpl.nasa.gov/. Rob Gutro
NASA'sGoddard Space Flight Center, Greenbelt, Md.
› Back To Top