Grow Text SizeShrink Text Size
First-of-its-Kind Map Depicts Global Forest Heights
Using NASA satellite data, scientists have produced a first-of-its kind map that details the height of the world’s forests. Although there are other local- and regional-scale forest canopy maps, the new map is the first that spans the entire globe based on one uniform method.

The work -- based on data collected by NASA's ICESat, Terra, and Aqua satellites -- should help scientists build an inventory of how much carbon the world’s forests store and how fast that carbon cycles through ecosystems and back into the atmosphere. Michael Lefsky of the Colorado State University described his results in the journal Geophysical Research Letters. 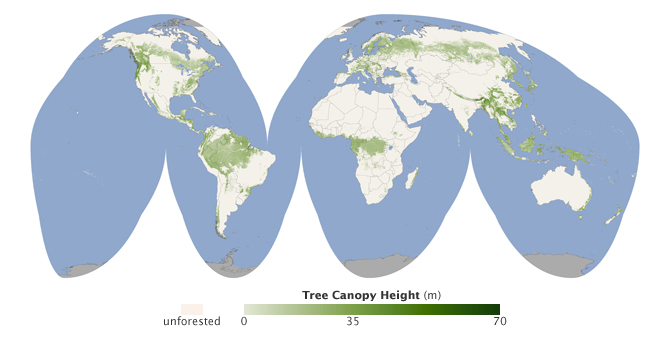 A first-of-its-kind global map shows forest canopy height in shades of green from 0 to 70 meters (230 feet). For any patch of forest, the height shown means that 90 percent or more of the trees in the patch are that tall or taller. Areas without forest are shown in tan. Credit: NASA Earth Observatory/Image by Jesse Allen and Robert Simmon/Based on data from Michael Lefsky.
› View larger image

The new map shows the world’s tallest forests clustered in the Pacific Northwest of North America and portions of Southeast Asia, while shorter forests are found in broad swaths across northern Canada and Eurasia. The map depicts average height over 5 square kilometers (1.9 square miles) regions), not the maximum heights that any one tree or small patch of trees might attain.

Temperate conifer forests -- which are extremely moist and contain massive trees such as Douglas fir, western hemlock, redwoods, and sequoias--have the tallest canopies, soaring easily above 40 meters (131 feet). In contrast, boreal forests dominated by spruce, fir, pine, and larch had canopies typically less than 20 meters (66 feet). Relatively undisturbed areas in tropical rain forests were about 25 meters (82 feet), roughly the same height as the oak, beeches, and birches of temperate broadleaf forests common in Europe and much of the United States. 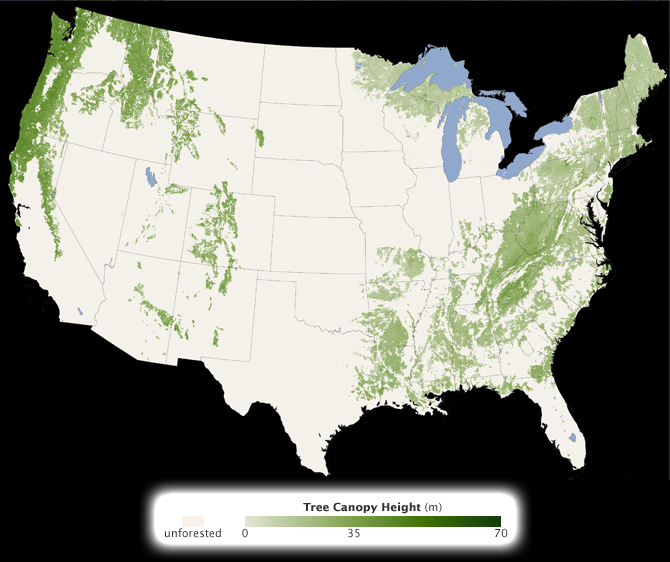 Scientific interest in the new map goes far beyond curiosities about tree height. The map has implications for an ongoing effort to estimate the amount of carbon tied up in Earth’s forests and for explaining what sops up 2 billion tons of “missing” carbon each year. 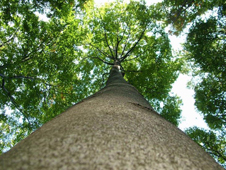 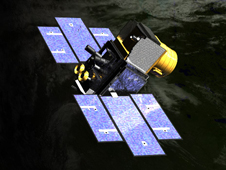 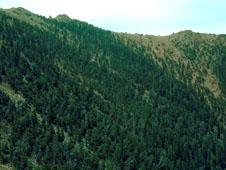 Stand of bristlecone pine on Almahgre Mountain in Colorado. Credit: Forestryimages.org/USDA Forest Service/Dave Powell
› Larger image There are hints that young forests absorb more carbon than older ones, as do wetter ones, and that large amounts of carbon end up in certain types of soil. But ecologists have only begun to pin down the details as they try to figure out whether the planet can continue to soak up so much of our annual carbon emissions and whether it will continue to do so as climate changes.

“What we really want is a map of above-ground biomass, and the height map helps get us there,” said Richard Houghton, an expert in terrestrial ecosystem science and the deputy director of the Woods Hole Research Center.

One of Lefsky’s colleagues, Sassan Saatchi of NASA’s Jet Propulsion Laboratory, has already started combining the height data with forest inventories to create biomass maps for tropical forests. Complete global inventories of biomass, when they exist, can improve climate models and guide policymakers on how to minimize the human impact on climate with carbon offsets.

More immediately, said University of Maryland remote sensing expert Ralph Dubayah, tree canopy heights can be plugged into models that predict the spread and behavior of fires, as well as ecological models that help biologists understand the suitability of species to specific forests.

Seeing Lasers through the Trees

Lefsky used data from a laser technology called LIDAR that’s capable of capturing vertical slices of surface features. It measures forest canopy height by shooting pulses of light at the surface and observing how much longer it takes for light to bounce back from the ground surface than from the top of the canopy. Since LIDAR can penetrate the top layer of forest canopy, it provides a fully-textured snapshot of the vertical structure of a forest -- something that no other scientific instrument can offer.

“LIDAR is unparalleled for this type of measurement,” Lefsky said, noting it would have taken weeks or more to collect the same amount of data in the field by counting and measuring tree trunks that LIDAR can capture in seconds.

He based his map on data from more than 250 million laser pulses collected during a seven year period. That may sound like an enormous amount of data, but each pulse returns information about just a tiny portion of the surface. Overall, the LIDAR offered direct measurements of 2.4 percent of the Earth’s forested surfaces.

To create his global map forest height map, Lefsky combined the LIDAR data with information from the Moderate Resolution Imaging Spectroradiometer (MODIS), a satellite instrument aboard both the Terra and Aqua satellites that senses a much broader swath of Earth’s surface, even though it doesn’t provide the vertical profile.

“This is a really just a first draft, and it will certainly be refined in the future,” said Lefsky.

Fusing the two sets of data proved difficult, and Lefsky spent years honing quantitative techniques to make the combination possible. Part of the difficulty was that the LIDAR data Lefsky used came from an instrument aboard ICESat, a mission optimized to study the topography of ice sheets, not vegetation.

The next generation LIDAR measurements of forests and biomass, which will improve the resolution of the map considerably, could come from NASA's Deformation, Ecosystem Structure and Dynamics of Ice (DESDynI) satellite, proposed for the latter part of this decade.

“We’ve never been able to look at a map and say here’s how tall the canopy is before,” said Dubayah, one of the DESDynI project scientists. “This map is a big step forward, and it really helps set the stage for DESDynI and shows what’s possible.”

Mystery of the Missing Carbon
http://earthobservatory.nasa.gov/Features/BOREASCarbon/