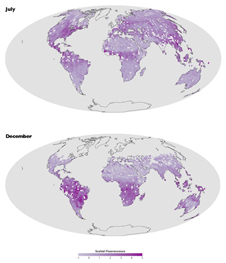 A first-of-a-kind global map of land plant fluorescence shows stronger photosynthetic activity in the Northern Hemisphere in July when light and temperature conditions were most conducive to plant growth, and the reverse in December. The maps are based on data from a spectrometer aboard the Japanese satellite GOSAT. Credit: NASA's Earth Observatory
› Larger image

In the future, fluorescence measurements could help farmers detect disease, droughts and other problems before they take a heavy toll on crops. Credit: John Deere Corporation
› Larger image 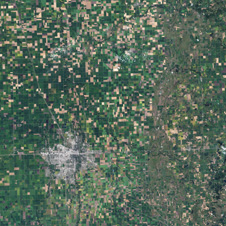 From space, farmland in northwest Minnesota looks like a patchwork quilt. Fields change hue with the season and with the alternating plots of organic wheat, soybeans, corn, alfalfa, flax or hay. Credit: NASA's Earth Observatory
› Larger image
› Related Earth Observatory story Scientists from NASA’s Goddard Space Flight Center in Greenbelt, Md., have produced groundbreaking global maps of land plant fluorescence, a difficult-to-detect reddish glow that leaves emit as a byproduct of photosynthesis. While researchers have previously mapped how ocean-dwelling phytoplankton fluoresce, the new maps are the first to focus on land vegetation and to cover the entire globe.

To date, most satellite-derived information related to the health of vegetation has come from “greenness” indicators based on reflected rather than fluorescent light. Greenness typically decreases in the wake of droughts, frosts, or other events that limit photosynthesis and cause green leaves to die and change color.

However, there is a lag between what happens on the ground and what satellites can detect. It can take days --- even weeks -- before changes in greenness are apparent to satellites.

Chlorophyll fluorescence offers a more direct window into the inner workings of the photosynthetic machinery of plants from space. "With chlorophyll fluorescence, we should be able to tell immediately if plants are under environmental stress -- before outward signs of browning or yellowing of leaves become visible," said Elizabeth Middleton, a NASA Goddard-based biologist and a member of the team that created the maps.

The new maps, based on data collected in 2009 from a spectrometer aboard a Japanese satellite called the Greenhouse Gases Observing Satellite (GOSAT), show sharp contrasts in plant fluorescence between seasons. In the Northern Hemisphere, for example, fluorescence production peaked during July, while in the Southern Hemisphere it did in December.

The new findings help confirm previous lab and field experiments that suggest chlorophyll fluorescence should taper off in the fall as the abundance of green foliage declines and stress increases as a result of lower temperatures and less favorable light conditions.

While additional research is required to sort out the subtleties of the fluorescence signal, the new maps are significant as they demonstrate the feasibility of measuring fluorescence from space.

In the future, the Goddard team expects that fluorescence measurements will complement existing measures of “greenness” in a variety of ways. They could help farmers respond to extreme weather or make it easier for aid workers to detect and respond to famines. Fluorescence could also lead to breakthroughs in scientists’ understanding of how carbon cycles through ecosystems – -- one of the key areas of uncertainty in climate science.

"What’s exciting about this is that we’ve proven the concept," said Joanna Joiner, the deputy project scientist for NASA's Aura mission and the leader of the Goddard team that created the maps. "The specific applications will come later."

The same mechanism that makes plants fluoresce causes a range of everyday objects -- ground-up plant leaves, white shirts, jellyfish, and even blood and urine -- to glow intensely under black light.

However, plants fluoresce in specific parts of the blue, green, red, and far-red spectrum. Chlorophyll fluorescence from green foliage, for example, is produced at the red and far-red wavelengths.

"In plants, fluorescence is not something that you can see with your naked eye because background light overwhelms it," explained Joiner, the lead author of the paper. When sunlight strikes a leaf, disc-like green structures called chloroplasts absorb most of the light and convert it into carbohydrates through photosynthesis.

Chloroplasts re-emit about two percent of incoming light at longer, redder wavelengths. This re-emitted light -- fluorescent light -- is what the Goddard scientists measured to create their map. Fluorescence is different than bioluminescence, the chemically-driven mechanism lightning bugs and many marine species use to glow without exposure to light.

For decades, scientists have measured fluorescence in plants by exposing leaves to laser beams that, like black light, make fluorescence more apparent. Such experiments have revealed much about how certain types of plants fluoresce, but researchers have not been able to use lasers to measure the phenomenon across broad swaths of the Earth’s surface.

To create their global fluorescence map, Joiner and her colleagues used a different technique. They analyzed an unusually dark section of the infrared portion of the solar spectrum embedded within a feature called a “Fraunhofer line.” There is little background light at the line they focused on -- at about 770 nanometers -- which made it possible to distinguish the faint fluorescence signal.


The Future of Fluorescence

The new findings have implications for both current and upcoming satellite missions. In the near term, awareness of the fluorescence signal should help atmospheric scientists refine measurements of carbon dioxide and methane from the GOSAT mission.

The creation of the maps also bolsters the argument that an experimental mission being developed by the European Space Agency (ESA) -- the Fluorescence Explorer (FLEX) mission -- would make significant breakthroughs. The ESA is currently in the midst of feasibility studies and has not yet set a launch date for FLEX.

The findings also suggest that NASA's Orbiting Carbon Observatory-2 (OCO-2), a mission that is designed to measure carbon dioxide levels much like GOSAT, should be able to make useful fluorescence measurements on a global scale. OCO 2 will launch no earlier than February of 2013 from Vandenberg Air Force Base in California.

The maps, published online in the journal Biogeosciences, represent just a first attempt to detect terrestrial fluorescence on a broad scale and will be enhanced and expanded over time, the scientists involved in the project emphasized.

More work needs to be done, for example, to understand how plant fluorescence varies depending on light conditions. In strong afternoon light, the conditions that GOSAT made its observations, unstressed plants produce a stronger fluorescence signal than stressed plants. However, complicating matters, the reverse is true in the morning or evening when light is less intense.

To disentangle the two opposing effects, the Goddard-based group plans to continue refining the mathematical methods they used to calculate fluorescence. Meanwhile, groups of scientists at NASA’s Jet Propulsion Laboratory in Pasadena, Calif. -- as well as Japanese and European research groups -- are in the process of honing similar fluorescence-monitoring methods.