Satellites are big. They cost a lot of money. At least that's the impression a couple of University of Maryland-College Park students had when they applied for an internship to help construct a satellite instrument with scientists at the NASA Goddard Space Flight Center in Greenbelt, Md. As the pair quickly discovered, nothing could have been farther from the truth.

To their astonishment, the satellite that Saman Kholdebarin and Lida Ramsey helped to develop was literally the size of a football. "I had no idea you could make these satellites so small," Kholdebarin said, recalling his surprise when his Goddard mentors explained the project to him. "I was astounded."

The small satellite, with a big mission, is appropriately named "Firefly." Sponsored by the National Science Foundation (NSF), the pint-sized satellite will study the most powerful natural particle accelerator on Earth — lightning — when it launches from the Marshall Islands aboard an Air Force Falcon 1E rocket vehicle next year. In particular, Firefly will focus on Terrestrial Gamma-ray Flashes (TGFs), a little understood phenomenon first discovered by NASA's Compton Gamma-Ray Observatory in the early 1990s. 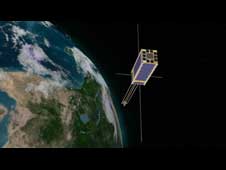 › View larger image
Firefly satellite in orbit still from the animation. Credit: NASA Although no one knows why, it appears these flashes of gamma rays that were once thought to occur only far out in space near black holes or other high-energy cosmic phenomena are somehow linked to lightning.

Using measurements gathered by Firefly's instruments, Goddard scientist Doug Rowland and his collaborators — Universities Space Research Association in Columbia, Md., Siena College, located near Albany, N.Y., and the Hawk Institute for Space Studies in Pocomoke City, Md. — hope to answer what causes these high-energy flashes. In particular, they want to find out if lightning triggers them or if they trigger lightning. Could they be responsible for some of the high-energy particles in the Van Allen radiation belts, which damage satellites? Firefly is expected to observe up to 50 lightning strokes per day, and about one large TGF every couple days.

"The fact that they exist at all is amazing," said Rowland, who spearheaded the overall effort. "They shouldn't exist."

The first hurdle to solving the mystery was building the spacecraft and its two experiment packages — all for the budgeted amount of less than one million dollars, which is about 100 times less expensive than what full-sized satellite missions normally cost. With help from about 15 students from the University of Maryland-College Park, Siena College in Loudonville, N.Y., and other universities, Rowland and the Firefly team designed and integrated the spacecraft and its instruments. The team expects to ship the completed satellite to the Air Force sometime this fall in preparation for a March 2011 launch. Once deployed in its low-Earth orbit, Firefly will provide at least three months of data, with a goal of up to one year to maximize student involvement in operations and data analysis. 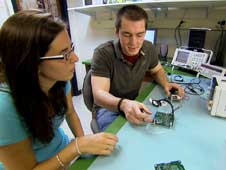 "We really are doing cutting-edge science," said Al Weatherwax, a Siena College professor who partnered with Rowland to win the NSF grant to develop the Firefly mission. "We got the right people and it worked out great. This is the most fun I've had. I'll be sad to see it end. We're already talking about our next bunch of CubeSats."

Under the two-year collaboration, the Hawk Institute for Space Sciences provided the spacecraft, ground station testing, and flight software.

Siena College built a number of spacecraft components, including one of Firefly's two experiment packages, the Very Low Frequency (VLF) receiver/photometer experiment. This experiment combines multiple sensors to measure both VLF radio waves and optical light emitted by lightning. These measurements will corroborate the occurrence of lightning when the spacecraft observes gamma-ray flashes. "As a college, we are able to take advantage of educational discounts," Weatherwax said, explaining how his team accomplished its assignment on a shoestring budget. "Commercial vendors either donated or reduced the price of key components."

And the Goddard team built Firefly's Gamma-Ray Detector (GRD) instrument, which will measure the energy and arrival times of incoming X-ray and gamma-ray photons associated with TGFs. Although Goddard scientist Joanne Hill designed the instrument, she assigned Ramsey and Kholdebarin the task of designing, building, and testing the instrument's power supply board, a component that monitors voltage levels that run the detector. David Guzman, a Ph.D. student from the Universidad de Alcalá in Madrid, Spain, meanwhile, was tasked with applying his knowledge of computer microprocessors to possibly enhance the instrument's performance. 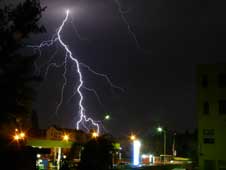 › View large image
An image of what Firefly will be studying in the coming months. Credit: stock.xchnge The experience was a memorable one for the trio. Both Ramsey and Kholdebarin agreed that their electrical-engineering classes taught them the basics of circuit electronics, but they learned through trial and error that it takes more than textbook knowledge to build a satellite component. Under certain applications, one circuit might work better with another, Kholdebarin discovered.

"After doing this, I've become more confident," Ramsey added. "I can figure out anything after this. That's the best experience. You really can do a lot more than you think you're capable of."

As for Guzman, who worked for the European Space Agency before beginning his graduate studies a few years ago, the project has revealed this much: "I hope to do a CubeSat in Spain some day."