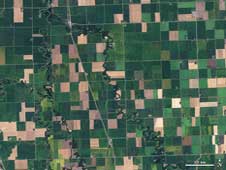 > View larger image
On September 10, 2009, Landsat scanned this image of farmland across northwest Minn., including a view of Noreen Thomas' organic farm on the banks of the Buffalo River near the middle of the image. Credit: NASA Earth Observatory Noreen Thomas’ farm looks like a patchwork quilt. Fields change hue with the season and with the alternating plots of organic wheat, soybeans, corn, alfalfa, flax, or hay.

Thomas enjoys this view from hundreds of miles above Earth’s surface -- not just for the beauty, but the utility. She is among a growing group of Midwest farmers who rely on satellite imagery from Landsat to maximize their harvest and minimize damage to their fields. It's become another crucial tool like their tractors and sprinklers.

“Our farm is unconventional – we grow food and breed animals using all-natural approaches,” said Thomas of her certified organic farm in Moorhead, Minnesota, where they also grow heirloom tomatoes, lettuce, squash, and peas. “So we’re happy to use unconventional methods to solve problems and keep our crops healthy.”

For $25 and an hour’s drive to the Grand Forks campus of the University of North Dakota (UND), Noreen and Lee Thomas took a one-day class on how to download and interpret satellite images, like those provided by NASA and the U.S. Geological Survey (USGS).

> View larger image
Like Noreen Thomas, hundreds of farmers in the upper Midwest use false-color (left) Landsat images like this one captured over Grand Forks, N.D. August 30, 2005 to evaluate the health of their fields. The image on the right shows the same land area in true color as the natural eye would see. Credit: Upper Midwest Aerospace Consortium

Downloading the latest images takes mere minutes on the Digital Northern Great Plains system, a free Web-based tool developed by NASA-funded researchers in the Upper Midwest Aerospace Consortium. Thomas punches in GPS coordinates of the area she’d like to see, and moments later she has a bumper crop of information and images.

To the untrained eye, the false-color images appear a hodge-podge of colors without any apparent purpose. But Thomas is now trained to see yellows where crops are infested, shades of red indicating crop health, black where flooding occurs, and brown where unwanted pesticides land on her chemical-free crops.

The images help the Thomases root out problems caused by Canadian thistle and other weeds. They help confirm that their crops are growing at least 10 feet from the borders of a neighboring farm – required to maintain organic certification. They can also spot the telltale signs of bottlenecking in the fields -- where flooding is over-saturating crops -- and monitor the impact of hail storms.

“We’d have to walk our entire 1,200 hundred-plus acres on a regular basis to see the same things we can see by just downloading satellite images,” said Thomas, who recently began providing her farm’s coordinates to her buyers in Japan. “There’s no more ideal way I know to show how healthy our crops are to someone thousands of miles away.” 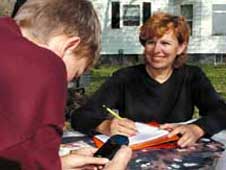 Organic farmer Noreen Thomas talks to school students on her farm. She frequently invites local students to the farm for tours and discussions about how she uses satellite images to monitor her 1,200-acre farm, among other topics. Credit: Noreen Thomas Crops are not the only beneficiaries of snapshots from space. Just as remote imagery informs Thomas when it’s best to rotate crops, she can also determine when her cows need a new pasture. When the large herd of cows chews its way through the landscape, satellite images show where the cows may be overgrazing.

Though Thomas believes she is the lone satellite ranger in her town, she’s certainly not alone among farmers in general. According to George Seielstad, recently retired director of the UND Center for People and the Environment and founder of the consortium, more than 600 farmers in the region are now devotees of satellite data as an aid to farming.

Thomas has also become a resource to her community because of her unique ability to analyze satellite images. “We’ve been called by a couple of townships to pull satellite images to verify flooding so they can apply for aid from the Federal Emergency Management Agency," she said. "There are any number of ways these pictures have been helping farming communities like ours, and community is what farming is built on.”