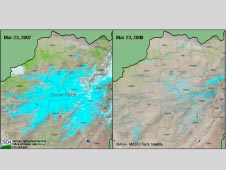 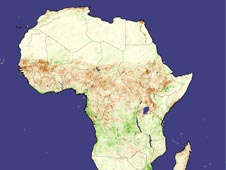 Almost all of the 300 families in the southwest Afghanistan town of Sya Kamarak, a day's drive along broken roads from the nearest city, live off the land. When the rains failed in April and May 2008, farmers lost most of their wheat harvest -- an annual crop down sixty percent from previous years. Three families had already lost children to starvation; the drought threatened to take more.

The situation in Sya Kamarak is one of the reasons two new NASA projects are being developed that use satellite data and powerful computer models to help public health officials better anticipate famine and speed up the delivery of food supplies and humanitarian aid to populations in critical need. With the inception of these programs, NASA satellite images are now used to develop a sustainable technique for identifying drought conditions and agricultural failure long before harvest time.

Approximately 70 million people died of famine in the twentieth century, including an estimated 400,000 in Ethiopia in the 1980s. These large-scale famines shocked the world and pointed to the lack of timely information - prompting the creation of an early warning system for famine by the U.S. Agency for International Development (USAID) in 1985. The warning system has since evolved into a worldwide Famine Early Warning System Network (FEWS NET) that uses NASA data to classify food insecurity levels and alert authorities to predicted crises.

FEWS NET monitors food security in 20 African countries, Guatemala, Haiti and Afghanistan. NASA and its partners, including, the U.S. Geological Survey, the National Oceanic and Atmospheric Administration and the U.S. Department of Agriculture (USDA), provide accurate and timely data products into FEWS NET. NASA's data on long-term changes in rainfall, vegetation, reservoir height and other climate factors significantly enhance USAID's ability to accurately predict food shortages and disseminate these findings to a broad audience around the world in a timely manner.

The newly funded NASA projects use the latest computer models to better understand famine and the economic impacts of food crises. One of these efforts uses NASA's Land Information System, a land surface model that predicts terrestrial water and energy and is useful in weather, climate and agricultural forecasting. NASA is also inputting remotely sensed data into food price models to map the correlation between food insecurity and food costs.

"For the first time we can leverage satellite observations of crop production to create a more accurate price model that will help humanitarian aid organizations and other decision makers predict how much food will be available and how the cost of food will change as a result," said Molly Brown, a research scientist at NASA's Goddard Space Flight Center. "This is a unique opportunity for an economic model to take climate variables into account in a way that can aid populations large and small."

One of the major issues encountered by humanitarian and local government officials is that it can sometimes take up to six months from the time that assistance is approved to the time it is delivered to those in need. This delay means that the budgetary decisions that precede humanitarian intervention must be made months before the actual onset of the famine. Earth observations can contribute to policy makers' understanding of hazards over years, seasons and months, giving them the ability to anticipate and plan for potential famines. John Haynes, program manager for the Applied Sciences Public Health Program, notes that integrating timely NASA data into FEWS NET is especially pertinent today, given that seemingly minute changes in climate conditions can affect an entire season of crops.

"Enhancing public health decision-making through remote sensing, as in the FEWS NET project, is particularly relevant due to the threat of global climate change," says Haynes, "Climate change may exacerbate food insecurity in the 21st Century from more frequent episodes of drought or flooding, depending on the region."

"We hope that decision makers will work together with scientists to apply our models, so that even a farmer on a small plot of land can better sustain his family during a drought," added Brown.

The town of Sya Kamarak, and many others around the world, may soon benefit from these NASA programs. In fact, at a 2009 USDA summit on food security, Robert Tetrault, satellite imagery archive manager with USDA said the following in regard to Sya Kamark, "The U.S. used [NASA satellite imagery] to develop a sustainable technique for identifying drought conditions and agricultural failure in Central Asia long before harvest time. They were able to assure adequate food and feed supplies, help farmers affected by the drought, and save lives."