Grow Text SizeShrink Text Size
Earth Science Week 2009: Videos
This six-episode web series, viewable below, explores the importance of Earth’s ocean in global climate change, from its critical role in regulating Earth’s carbon balance to the potential threat of rising sea levels on coastal populations. The theme for the series, produced by NASA for Earth Science Week 2009, is "Tides of Change." 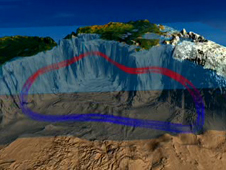 We know climate change can affect us, but does climate change alter something as vast, deep and mysterious as our oceans? For years, scientists have studied the world's oceans by sending out ships and divers, deploying data-gathering buoys, and by taking aerial measurements from planes. But one of the better ways to understand oceans is to gain an even broader perspective - the view from space. NASA's Earth observing satellites do more than just take pictures of our planet. High-tech sensors gather data, including ocean surface temperature, surface winds, sea level, circulation, and even marine life. Information the satellites obtain help us understand the complex interactions driving the world's oceans today - and gain valuable insight into how the impacts of climate change on oceans might affect us on dry land. 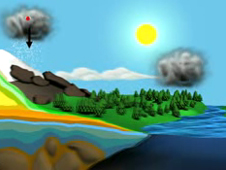 Water is all around us, and its importance to nearly every natural process on earth cannot be underestimated. It is vital to life, but it is also tightly coupled to climate, helping to carry heat from the tropics to higher latitudes. Changes to the water cycle affect climate and vice versa. The water cycle is the movement of water around the Earth in all its forms. Imagine the path a molecule of water might take after it evaporates from the salty ocean. It might condense and return to the ocean as rainfall, or it might move through the atmosphere as water vapor and fall onto the land surface as freshwater rain or snow. Snow may become part of an ice cap or glacier, where the water molecule could remain for centuries, or it might soon melt and enter the soil or a stream. Rain wets the soil, becoming available for plants to use. The water molecule may drain into an aquifer, where it could remain for many years before feeding into a stream. Streams flow into lakes and rivers, but along the way the water molecule might be captured for use industry, agriculture, or drinking and other domestic needs. Ultimately, the water molecule will return to the ocean where the journey begins anew. This video explains what the water cycle is and how important it is to life on earth. 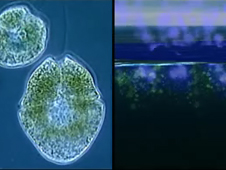 One tiny marine plant makes life on Earth possible: phytoplankton. These microscopic photosynthetic drifters form the basis of the marine food web, they regulate carbon in the atmosphere, and are responsible for half of the photosynthesis that takes place on this planet. Earth's climate is changing at an unprecedented rate, and as our home planet warms, so does the ocean. Warming waters have big consequences for phytoplankton and for the planet. 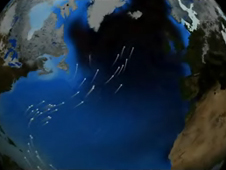 Salinity plays a major role in how ocean waters circulate around the globe. Salinity changes can create ocean circulation changes that, in turn, may impact regional and global climates. The extent to which salinity impacts our global ocean circulation is still relatively unknown, but NASA's new Aquarius mission will help advance that understanding by painting a global picture of our planet's salty waters. 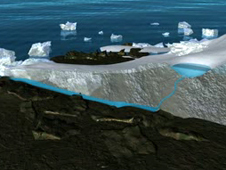 Sea level rise is an indicator that our planet is warming. Much of the world's population lives on or near the coast, and rising seas are something worth watching. Sea level can rise for two reasons, both linked to a warming planet. When ice on land, such as mountain glaciers or the ice sheets of Greenland or Antarctica, melt, that water contributes to sea level rise. And when our oceans get warmer - another indicator of climate change - the water expands, also making sea level higher. Using satellites, lasers, and radar in space, and dedicated researchers on the ground, NASA is studying the Earth's ice and water to better understand how sea level rise might affect us all. 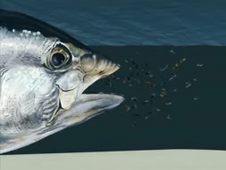 Carbon is all around us. This unique atom is the basic building block of life, and its compounds form solids, liquids, or gases. Carbon helps form the bodies of living organisms; it dissolves in the ocean; mixes in the atmosphere; and can be stored in the crust of the planet. A carbon atom could spend millions of years moving through this complex cycle. The ocean plays the most critical role in regulating Earth's carbon balance, and understanding how the carbon cycle is changing is key to understanding Earth's changing climate.