Anna Michalak will describe how her team is leveraging NASA data to create the highest resolution maps of carbon dioxide sources and sinks across North America estimated using atmospheric carbon dioxide observations. Researchers currently know that carbon dioxide uptake by "sinks," such as oceans and plants, equals about half of that released by sources, such as fossil fuel burning. But how will that change in the future? To find out, researchers need to better understand the biological, physical, and chemical processes controlling carbon uptake and release. It's not as simple as taking a snapshot of carbon dioxide at any one moment. Instead, the researchers use NASA data to aid in a sleuthing technique that combines weather and atmospheric models to trace atmospheric measurements of the gas back to its source, taking into account the impact from terrestrial and ocean ecosystems. The researcher team will soon be releasing its first map of carbon dioxide sources and sinks in North America. 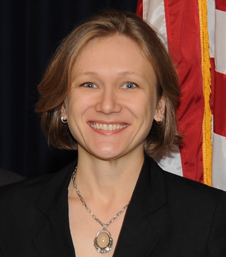 Photo of Anna Michalak. Credit: NASA About the Panelist

Anna Michalak is an associate professor in the Department of Civil and Environmental Engineering, and the Department of Atmospheric, Oceanic, and Space Sciences, at the University of Michigan, Ann Arbor. Michalak's research interests focus on atmospheric greenhouse gas emission and sequestration estimation, water quality monitoring and contaminant source identification, and the use of remote sensing for Earth system characterization. The common theme of her research is the development and application of statistical and geostatistical data fusion methods for optimizing the use of limited in situ and remote sensing environmental data. Michalak is a co-author on over 150 scientific publications and conference presentations, including over 40 invited presentations and seminars. She has been recognized through a large number of awards including the Presidential Early Career Award for Scientists and Engineers. More > 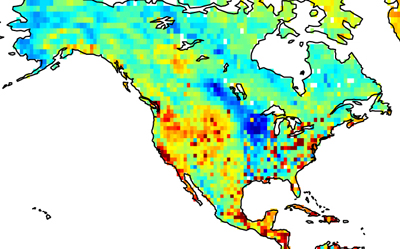 Figure 1: The carbon balance for North America for July 2004 is estimated using the Geostatistical Inverse Modeling (GIM) approach, which makes use of atmospheric observations of carbon dioxide, meteorological information about winds and weather patterns, as well as a variety of NASA data products and other spatial and temporal datasets. Orange and red colors represent a release of carbon to the atmosphere, whereas green and blue colors represent a net uptake of carbon from the atmosphere. The total carbon balance represents the sum of human emissions (such as fossil fuel burning), photosynthesis (carbon uptake by plants), and respiration (carbon release by plants and soils). The carbon balance is estimated at a resolution of about 60 x 60 miles. Note the strong uptake in the agricultural areas in the Midwest during the peak growing season. Credit: Sharon Gourdji and Anna Michalak, University of Michigan 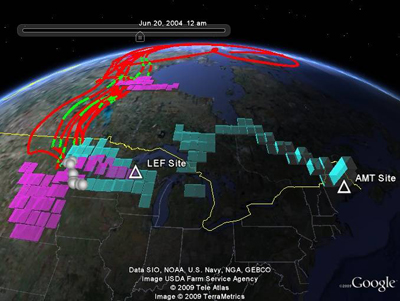 Figure 2: This image shows a Google Earth application that uses measurements of atmospheric carbon dioxide concentrations together with information about wind and weather patterns from atmospheric models, to trace back to the location of the gas' source or sink. The tool provides a way to visualize in time and space the extensive amount of data that goes into computer models, helping scientists and the public to better understand Earth's carbon cycle. Credit: Google/NASA/Tyler Erickson (Michigan Technological University)

> Scientist Models the Mysterious Travels of Greenhouse Gas
> NASA Science Seminar: The Role of the Earth in Our Carbon Dioxide Future