A New View of Arctic Haze

Jim Crawford, an atmospheric scientist, describes early results from NASA's Arctic Research of the Composition of the Troposphere from Aircraft and Satellites (ARCTAS) mission, which in 2008 flew instrument-laden aircraft in coordination with satellites to better understand the chemistry of Earth's atmosphere at northern latitudes. Most of the detailed historical record of Arctic haze composition is based on observations taken at the surface. A preliminary study of the combined observations of Arctic haze from satellites, aircraft, and ground sites during ARCTAS found more black carbon aerosols from human-induced activity and northern region forest fires in upper altitudes (above one mile) than thought before. These aerosols influence atmospheric temperatures and the formation and optical properties of clouds that also influence surface temperature. Also, an increase in fires in northern temperate areas over recent decades may play an important role in future climate changes. Data collected during ARCTAS indicate there are more aerosols from Siberian forest fires and agricultural burning in the Arctic haze -- an important source of black carbon aerosols during Arctic spring. Black carbon aerosols lead to atmospheric heating, and if deposited on the surface, continue to influence increased melting in snow and ice covered regions. 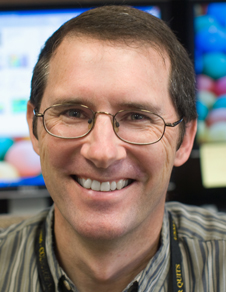 Photo of Jim Crawford. Credit: NASA About the Panelist

Jim Crawford is a research scientist with the Chemistry and Dynamics Branch at NASA Langley Research Center. His research interests include atmospheric composition and chemistry as it relates to air quality and climate change, use of airborne observations to assess understanding of atmospheric chemical processes, and use of satellite observations to observe long-range transport of pollution. He has served on the science teams for nine NASA airborne field campaigns as a contributing researcher and science lead. He has been the recipient of NASA's Exceptional Achievement and Outstanding Leadership Medals as well as the Presidential Early Career Award for Scientists and Engineers. Crawford recently served as manager of the Tropospheric Chemistry Program at NASA Headquarters where he was responsible for the organization and execution of the ARCTAS field campaign. More >

Figure 1: This depiction shows Arctic haze (blue) through a slice of the atmosphere, observed in spring 2008 with the High Spectral Resolution Lidar instrument during a flight on NASA's B-200 aircraft during the Arctic Research of the Composition of the Troposphere from Aircraft and Satellites (ARCTAS) mission. The haze is composed of tiny atmospheric particles called aerosols, which are transported from mid-latitudes into the Arctic, likely impacting climate and complicated climate feedback mechanisms. Credit: NASA