Phytoplankton blooms in the seasonal seas are among the most dramatic annual events in the oceans. They support massive fisheries, marine birds and mammals, and soak up tons of carbon dioxide from the atmosphere. Michael Behrenfeld, an oceanographer, presents a new detailed analysis of satellite observations of phytoplankton that challenges the century-old view of how these blooms form. Previously, the appearance of the blooms in the spring when temperatures are warming and sunlight levels are increasing has led scientists to assume that the blooms were caused by increased phytoplankton growth rates under improving environmental conditions. The new findings show that the bloom does not start in spring, but in winter when growth conditions are at their worst. These findings shed a new light on how ocean ecosystems function and provide insight on recent trends in phytoplankton blooms and potential future changes with climate warming. 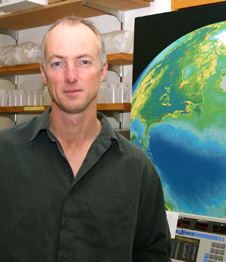 Photo of Michael Behrenfeld. Credit: NASA About the Panelist 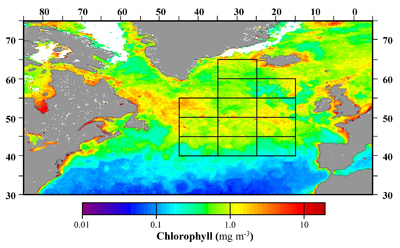 Figure 1: In spring, phytoplankton concentrations peak in the North Atlantic and are visible in data collected by the Sea-viewing Wide Field-of-view Sensor (SeaWiFS). Green, orange, and red represent areas of higher phytoplankton concentrations, while blue represents lower concentrations. The gridded boxes show the area studied in new research that looked at phytoplankton growth rate information from SeaWiFS combined with habitat information and found that the annual North Atlantic bloom begins in winter, not in spring as previously believed, and is likely driven by predator and prey interactions. Credit: NASA 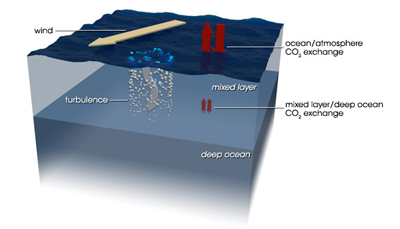 Figure 2: The mixed layer is a thin layer of water with nearly uniform temperature, salinity and dissolved gases. Wind-driven turbulence maintains the mixed layer by stirring the water near the ocean surface. The layer deepens in winter, providing extra habitat for phytoplankton and reducing the chance of encountering predators, which allows the phytoplankton population to flourish and gives way to the annual bloom. Credit: NASA Earth Observatory 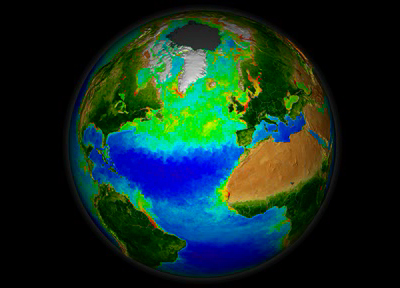 Animation 1: This animation represents nearly a decade's worth of data taken by the space-based SeaWiFS instrument, showing the seasonal abundance of plant life in the North Atlantic. Dark blue represents warmer areas where there is little life, and greens and reds represent cooler nutrient-rich areas where life is abundant. Credit: NASA Scientific Visualization Studio