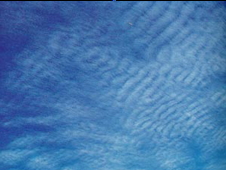 Click image for full resolution.
Cirrus clouds are ice clouds. They can look like delicate white feathers or streamers. They are always more than three miles up where the temperature is below freezing, even in summer. Wind currents twist and spread the ice crystals into wispy strands. 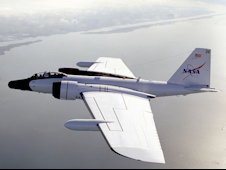 Click image for full resolution.
The WB-57 can climb up to 63,000 feet, where the cirrus clouds are located.

The Mid-latitude Airborne Cirrus Properties Experiment (MACPEX) is an airborne field campaign to investigate cirrus cloud properties and the processes that affect their impact on radiation. The campaign will use the NASA WB-57 aircraft based at Ellington, Texas and start its science flights over Oklahoma on April 1, 2011. Ames project scientist Eric Jensen agreed to answer a few of our questions about the campaign.

If the field campaign is ultimately about the amount of sun radiation the Earth absorbs or reflects, why is the study selectively studying cirrus clouds and their ice crystals? Why not just study atmospheric clouds in general?

Eric Jensen: Cirrus clouds are high, wispy white clouds made of fine ice crystals with typical altitudes of 16,500 – 45,000 ft. Modeling studies have shown that predictions of future climate change are very sensitive to assumptions made about cirrus clouds in the models. Cirrus clouds are less well understood than liquid clouds in the lower troposphere (the lowest portion of the atmosphere), largely because of a lack of observations and appropriate instrumentation in the past.

How are ice crystals formed? How are their microphysical properties related to the amount of radiation Earth reflects or absorbs?

EJ: Cirrus ice crystals form on existing aerosols in the atmosphere; however, the details of this process are not well understood. Cirrus clouds affect climate in two ways: they scatter incoming solar radiation and they absorb outgoing infrared radiation. The balance between these effects depends on the number and size of ice crystals in cirrus clouds.

NASA’s WB-57 will be flying over Oklahoma in temperate middle latitudes. These mid-latitude regions, located midway between the equator and the poles in both the northern and southern hemispheres, experience the most changeable weather on Earth. Is the changeable weather important to your study?

EJ: Not really. The reason we are focusing on the mid-latitudes is that we have studied relatively few cirrus clouds in this region with the current instrumentation. There is also the practical matter that the aircraft is based at Ellington Airfield in Houston.

What types of atmospheric particles are needed to form the ice crystals in cirrus clouds? Are there any specific particles that are causing adverse effects to the climate?

EJ: Cirrus can form on aqueous sulfate aerosols or insoluble particles such as mineral dust. Anthropogenic aerosols, such as soot from aircraft, may be modifying cirrus clouds and thereby modifying climate.

Cirrus clouds have life cycles? How do cirrus microphysical properties evolve through the life cycles of the clouds?

EJ: Processes such as sedimentation, entrainment, and aggregation modify the distribution of ice crystal sizes and shapes as the clouds evolve. It is important to understand how these processes work and to properly represent these processes in climate models.