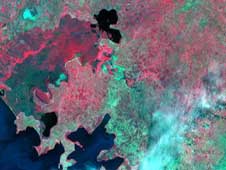 > Larger image
Credit: NASA EO-1
Today NASA, the US Agency for International Development (USAID) and their partners are in Nairobi, Kenya, to launch SERVIR-Africa, a program that helps scientists, government leaders and local communities address concerns related to natural disasters, disease outbreaks, biodiversity and climate change. SERVIR, Spanish for “to serve,” integrates satellite resources of the U.S. and other countries into a Web-based Earth information system, putting previously inaccessible information into action locally.

SERVIR has been operational in Central America, the Caribbean and southern Mexico since 2005. Now, through the support of multiple government agencies, non-government organizations, and research institutes, USAID and NASA are expanding the system to Africa in partnership with the Regional Center for Mapping of Resources for Development (RCMRD) in Nairobi. The program is led by NASA’s Marshall Space Flight Center, with contributions from the Goddard Space Flight Center.

One of the first applications of SERVIR-Africa, provided by GSFC, will use NASA earth science data from TRMM, EO-1, and MODIS to better predict areas at risk for severe flooding. One such location (pictured) is the Lake Victoria Basin in Kenya, Uganda and Tanzania, where nearly 30 million people live. The Nzoia River basin lies entirely within the Lake Victoria basin in Kenya. The SERVIR-Africa team captured multispectral imagery of the Nzoia River basin from the NASA’s EO-1 satellite on August 23, 2008, to provide baseline imagery of this frequently flooded area for future analysis.

The NASA’s Earth Observing One (EO-1) satellite celebrates its 8th birthday today. The satellite launched on November 21, 2000, with an initial design and mission life of one year, but has continued successful operations for more than 7 years past the initial mission. EO-1 has performed over 76,000 images to date.