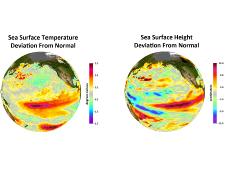 PASADENA, Calif. – A relatively new type of El Niño, which has its warmest waters in the central-equatorial Pacific Ocean, rather than in the eastern-equatorial Pacific, is becoming more common and progressively stronger, according to a new study by NASA and NOAA. The research may improve our understanding of the relationship between El Niños and climate change, and has potentially significant implications for long-term weather forecasting.

Lead author Tong Lee of NASA's Jet Propulsion Laboratory, Pasadena, Calif., and Michael McPhaden of NOAA's Pacific Marine Environmental Laboratory, Seattle, measured changes in El Niño intensity since 1982. They analyzed NOAA satellite observations of sea surface temperature, checked against and blended with directly-measured ocean temperature data. The strength of each El Niño was gauged by how much its sea surface temperatures deviated from the average. They found the intensity of El Niños in the central Pacific has nearly doubled, with the most intense event occurring in 2009-10.

The scientists say the stronger El Niños help explain a steady rise in central Pacific sea surface temperatures observed over the past few decades in previous studies--a trend attributed by some to the effects of global warming. While Lee and McPhaden observed a rise in sea surface temperatures during El Niño years, no significant temperature increases were seen in years when ocean conditions were neutral, or when El Niño's cool water counterpart, La Niña, was present.

"Our study concludes the long-term warming trend seen in the central Pacific is primarily due to more intense El Niños, rather than a general rise of background temperatures," said Lee.

"If the trend we observe continues," McPhaden added, "it could throw a monkey wrench into long-range weather forecasting, which is largely based on our understanding of El Niños from the latter half of the 20th century."

El Niño, Spanish for "the little boy," is the oceanic component of a climate pattern called the El Niño-Southern Oscillation, which appears in the tropical Pacific Ocean on average every three to five years. The most dominant year-to-year fluctuating pattern in Earth's climate system, El Niños have a powerful impact on the ocean and atmosphere, as well as important socioeconomic consequences. They can influence global weather patterns and the occurrence and frequency of hurricanes, droughts and floods; and can even raise or lower global temperatures by as much as 0.2 degrees Celsius (0.4 degrees Fahrenheit).

During a "classic" El Niño episode, the normally strong easterly trade winds in the tropical eastern Pacific weaken. That weakening suppresses the normal upward movement of cold subsurface waters and allows warm surface water from the central Pacific to shift toward the Americas. In these situations, unusually warm surface water occupies much of the tropical Pacific, with the maximum ocean warming remaining in the eastern-equatorial Pacific.

Since the early 1990s, however, scientists have noted a new type of El Niño that has been occurring with greater frequency. Known variously as "central-Pacific El Niño," "warm-pool El Niño," "dateline El Niño" or "El Niño Modoki" (Japanese for "similar but different"), the maximum ocean warming from such El Niños is found in the central-equatorial, rather than eastern, Pacific. Such central Pacific El Niño events were observed in 1991-92, 1994-95, 2002-03, 2004-05 and 2009-10. A recent study found many climate models predict such events will become much more frequent under projected global warming scenarios.

Lee said further research is needed to evaluate the impacts of these increasingly intense El Niños and determine why these changes are occurring. "It is important to know if the increasing intensity and frequency of these central Pacific El Niños are due to natural variations in climate or to climate change caused by human-produced greenhouse gas emissions," he said.

Results of the study were published recently in Geophysical Research Letters.