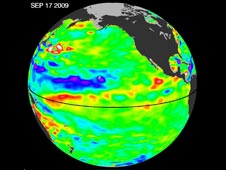 Since May 2009, the tropical Pacific Ocean has switched from a cool pattern of ocean circulation known as La Niña to her warmer sibling, El Niño. This cyclical warming of the ocean waters in the central and eastern tropical Pacific generally occurs every three to seven years, and is linked with changes in the strength of the trade winds. El Niño can affect weather worldwide, including the Atlantic hurricane season, Asian monsoon season and northern hemisphere winter storm season. But while scientists agree that El Niño is back, there's less consensus about its future strength.

Recent data on sea-level height from the Jason-1 and Ocean Surface Topography Mission/Jason-2 satellites, displayed at http://sealevel.jpl.nasa.gov/science/jason1-quick-look/ , show that most of the equatorial Pacific is near normal (depicted in the images as green). The exceptions are the central and eastern equatorial Pacific, which are exhibiting areas of higher-than-normal sea surface heights (warmer-than-normal sea-surface temperatures) at 180 and 110 degrees west longitude.

The latest image from Jason-2, which can be seen at http://sealevel.jpl.nasa.gov/science/jason1-quick-look/2009/images/20090917P.jpg, reflects a 10-day data cycle centered around September 17, 2009. It shows a series of warm "bumps" visible along the equator, denoted in the image by a black line. Known as Kelvin waves, these pools of warm water were triggered when the normally westward-blowing trade winds weakened in late July and again in early September, sending them sliding eastward from the western Pacific toward the Americas. The Kelvin waves are 5 to 10 centimeters (2 to 4 inches) high, a few hundred kilometers wide and a few degrees warmer than surrounding waters. Traveling east at about 3 meters per second (6 miles per hour), they are expected to reach the coast of Peru in October. (An animation of the evolution of Pacific Ocean conditions since January 2006 is at: http://www.jpl.nasa.gov/videos/earth/elnino20090928.mov ). 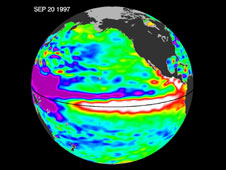 The 1997-1998 El Nino, seen here in this Sept. 20, 1997 image from the NASA/French Space Agency Topex/Poseidon satellite, was one of the most powerful El Ninos of the past 100 years.Credit: NASA/JPL Ocean Surface Topography Team
› Larger image


Yet the present condition of this year's El Niño is dwarfed in comparison with the "macho" El Niño of 1997-1998, which brought devastating floods to California and severe drought to Indonesia, Australia and the Philippines. As seen in this September 20, 1997, image from the NASA/French Space Agency Topex/Poseidon satellite (see http://sealevel.jpl.nasa.gov/files/images/browse/entp2090.gif ), the size and intensity of the 1997-1998 event were much greater by this time of year. That leads some scientists, such as Bill Patzert, an oceanographer and climatologist at NASA's Jet Propulsion Laboratory, Pasadena, Calif., to express uncertainty as to whether this El Niño event will intensify enough to deliver the dramatic impacts seen during that last intense El Niño in 1997-1998.

"For the past few months, the trade winds have weakened somewhat, but whether the new Kelvin waves traveling eastward across the Pacific will be adequate to pump this El Niño up enough to reinvigorate it and deliver any real impacts remains uncertain," Patzert says.

None of these events delivered the heart-thumping impacts of the monster El Niño of 1997-1998. During the winter of 1997-1998, Southern California was soaked with nearly 79 centimeters (more than 31 inches) of rain (twice Los Angeles' normal annual rainfall amount of about 38.5 centimeters, or 15.14 inches). In addition, there was heavy snowpack in the Sierra Nevada and Rocky Mountains. In comparison, during the past four winters, Los Angeles has averaged only 24.6 centimeters (9.7 inches) of rain (64 percent of normal), and snowpacks have been stingy.

In fact, Patzert notes that this El Niño bears many similarities to the 2006-2007 El Niño event. During that winter, much of the American Southwest experienced record-breaking drought, and Los Angeles had its driest winter in recorded history.

So what will El Niño 2009-2010 hold in store for the world this coming winter? In spite of the uncertainties, experienced climate forecasters around the world will continue to monitor the Pacific closely for further signs of El Niño development and will give it their best shot.

"Unless present El Niño conditions intensify, I believe this El Niño is too weak to have a major influence on many weather patterns," he says. "A macho El Niño like that of 1997-1998 is off the board, but I'm hoping for a relaxation in the tropical trade winds and a surprise strengthening of El Niño that could result in a shift in winter storm patterns over the United States. If the trade winds decrease, the ocean waters will continue to warm and spread eastward, strengthening the El Niño. That scenario could bring atmospheric patterns that will deliver much-needed rainfall to the southwestern United States this winter. If not, the dice seem to be loaded for below-normal snowpacks and another drier-than-normal winter."

Still, Patzert remains hopeful. "Don't give up on this El Niño," he added. "He might make a late break and put his spin on this fall and winter's weather systems."

To learn more about Jason-1 and the Ocean Surface Topography Mission/Jason-2, visit: http://sealevel.jpl.nasa.gov .