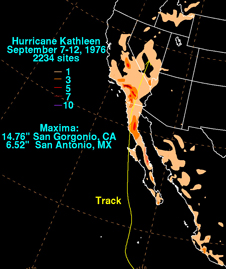 In September 1976, Hurricane Kathleen made landfall in northern Baja California and moved into California and Arizona, still at tropical storm strength, bringing heavy rain to parts of Southern California, as seen in this NOAA map of the storm’s track and rainfall totals. The storm destroyed much of the city of Ocotillo, Calif., and killed 12 people in the United States. Image credit: NOAA NCEP
› Larger view

Here are a few of the more notable tropical cyclones that have affected Southern California in recorded history:

- The San Diego hurricane of 1858. This is the only tropical cyclone ever known to have affected California as a hurricane. Independent scholar Michael Chenoweth and researcher Christopher Landsea of the National Oceanic and Atmospheric Administration reconstructed the storm in a paper published in 2004 in the Bulletin of the American Meteorological Society, using newspaper reports, daily weather observations by U.S. Army surgeons, ship observations and U.S. Coast Survey notebooks. The storm formed in the eastern Pacific Ocean in late September and intensified into an estimated Category 1 hurricane with highest winds of about 85 miles per hour (74 knots). By Oct. 2, its untypical north-northeasterly course had steered it just off the coast of San Diego, where cooler waters and strong wind shear weakened it slightly. Luckily, just before making landfall, the storm made a turn to the west-northwest, and then dissipated near Santa Catalina Island. Despite the near miss, instrument records in San Diego indicate the area experienced hurricane or near-hurricane force winds of approximately 75 mph (65 knots), heavy rain and considerable property damage. Heavy rainfall was also reported in San Pedro, Los Angeles and Visalia — up to 7 inches (18 centimeters) in places. There were few reports of significant winds in the Los Angeles region, however. The researchers reported that based upon historical records and modeling results, such a storm can be expected in the San Diego area about every 200 years, most likely during an El Nino event.

- The Tropical Cyclones of the El Nino of 1938-39. In Sept. 1939, just weeks after "The Wizard of Oz" premiered at movie theaters, Southern Californians may have thought they were in Kansas as well, as the first of four tropical cyclones affected the region during the El Nino of 1938-39. The first two storms – remnants of hurricanes – tracked northeastward across northern Baja California into southwest Arizona, bringing heavy rainfall to parts of Southern California: up to 7 inches (18 centimeters) for the first storm and up to 4 inches (10 centimeters) for the second. A third storm dissipated in southern Baja California but brought up to 3 inches (8 centimeters) of rain to parts of the Southland. Then, on Sept. 25, an unnamed storm made landfall near San Pedro with winds near 50 mph (43 knots), becoming the only tropical cyclone to ever make landfall in Southern California as a tropical storm in recorded history. In addition to the winds, the storm brought up to 5 inches (13 centimeters) of rain to the Los Angeles basin and as much as 12 inches (30 centimeters) of rain to the surrounding mountains. The storm caused heavy flooding and killed at least 45 people, mostly at sea. Low-lying coastal regions from Malibu to Huntington Beach were flooded, and thousands of people were stranded in their homes. There was heavy street flooding — up to 3 feet (1 meter) in places. Ten homes were washed away by waves in Belmont Shore. There was significant agricultural damage. The pier at Point Mugu was destroyed. There was significant disruption of communications throughout the region. The fact that the storm came on suddenly, leaving many people unprepared, led to the establishment of a Southern California forecast office for the United States Weather Bureau in 1940.

- Kathleen. In mid-September of 1976, during an El Nino year, Hurricane Kathleen made landfall in northern Baja California and moved into California and Arizona, still at tropical storm strength. Sustained winds of 57 mph (91 kilometers per hour) were reported in Yuma, Ariz. The storm brought 6 to 12 inches (15 to 30 centimeters) of rain to Southern California's central and southern mountains. Ocotillo, Calif. suffered catastrophic damage, with 70 to 80 percent of the town destroyed. Twelve deaths were blamed on the storm in the United States. The Associated Press reported hundreds of homes were destroyed or damaged in the United States by Kathleen, which was described as a one-in-160-year event.

- Linda. Sept. 1997, also an El Nino year, brought one colossal near-miss to Southern California with Hurricane Linda, the strongest eastern Pacific hurricane on record. This Category 5 hurricane at one point had maximum sustained winds of 185 mph (161 knots). For a couple of nerve-wracking days, National Hurricane Center forecasters warned the storm could barrel into Southern California, most likely as a tropical storm. Fortunately, the storm turned westward away from land. Still, Linda brought significant rainfall across parts of Southern California and waves up to 18 feet (5.5 meters), and caused several million dollars in property damage.