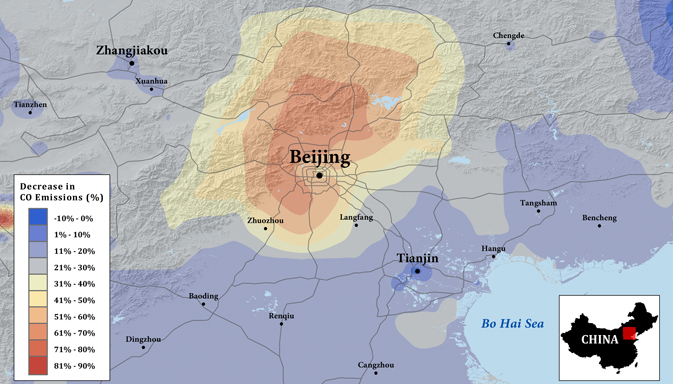 New research shows that levels of carbon monoxide dropped sharply in the Beijing area between 2007 and 2008, due to traffic restrictions imposed because of the 2008 Summer Olympics. Knowing the levels of carbon monoxide allowed the researchers to infer that carbon dioxide emissions also dropped dramatically. The science team used satellite measurements, combined with output from a computer model like that illustrated above, to quantify the amount of reduction in this major greenhouse gas. Image credit: UCAR. Illustration by Lex Ivey, based on NCAR data.
› Larger view

A new NASA-funded study of the impacts of China's traffic restrictions for the 2008 Summer Olympics in Beijing shows how widespread changes in transportation patterns could greatly reduce the threat of climate change.

New research by an international team of scientists led by the National Center for Atmospheric Research (NCAR), Boulder, Colo., indicates that China's restrictions on motor vehicles designed to improve air quality during the games had the side benefit of dramatically cutting emissions of carbon dioxide by between 26,500 and 106,000 U.S. tons (24,000 and 96,000 metric tons) during the event.

To put this in perspective, the authors note that this reduction by a single city represents more than one-quarter of one percent of the emissions cut that would be necessary worldwide, on a sustained basis, to prevent the planet from heating up by more than about 3.6 degrees Fahrenheit (2 degrees Celsius) by the end of this century. That is the amount of heating generally considered to lead to major societal impacts.

While scientists have long known that reduced traffic would lead to lower carbon-dioxide emissions, precise estimates for an actual urban area are difficult to calculate.

"The Beijing Olympics allowed us to actually measure what happens when people drive much less, and it turns out that it makes quite a substantial difference to our climate," says NCAR scientist Helen Worden, the lead author. "People may think their choice of how to commute to work doesn't make a difference, whether driving their cars or riding their bikes. But on a large scale, it really does."

Recent research has confirmed that China's traffic restrictions successfully reduced levels of air pollutants such as carbon monoxide and ozone. Worden and her colleagues, using new methods in satellite observations and computer simulations, were also able to estimate the impact on carbon dioxide, a powerful greenhouse gas. Data from the NCAR/University of Toronto Measurements of Pollution in the Troposphere (MOPITT) instrument aboard NASA's Terra satellite were used to obtain the carbon monoxide estimates utilized to infer the carbon dioxide emissions.

Worden adds that the same study could not be done for this summer's London Olympics, partly because the surface and cloud conditions in London aren't as favorable for the measurements of carbon monoxide near the surface from MOPITT. In addition, London is very different from Beijing in terms of pollution controls, and it has already restricted traffic in the central city for several years.

Funded primarily by NASA, the study was published in Geophysical Research Letters, a publication of the American Geophysical Union. It was co-authored by researchers at the University of Iowa, Iowa City; the University of Tsinghua in Beijing; Argonne National Laboratory, Lemont, Ill.; and NASA's Jet Propulsion Laboratory, Pasadena, Calif. NCAR is sponsored by the National Science Foundation.

To learn more about the study, read the full University Corporation for Atmospheric Research news release at: https://www2.ucar.edu/atmosnews/news/7535/reducing-traffic-2008-olympics-yielded-large-cut-co2 .