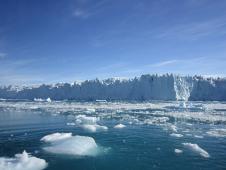 PASADENA, Calif. -- The Greenland and Antarctic ice sheets are losing mass at an accelerating pace, according to a new NASA-funded satellite study. The findings of the study -- the longest to date of changes in polar ice sheet mass -- suggest these ice sheets are overtaking ice loss from Earth's mountain glaciers and ice caps to become the dominant contributor to global sea level rise, much sooner than model forecasts have predicted.

The nearly 20-year study reveals that in 2006, a year in which comparable results for mass loss in mountain glaciers and ice caps are available from a separate study conducted using other methods, the Greenland and Antarctic ice sheets lost a combined mass of 475 gigatonnes a year on average. That's enough to raise global sea level by an average of 1.3 millimeters (.05 inches) a year. (A gigatonne is one billion metric tons, or more than 2.2 trillion pounds.)

The pace at which the polar ice sheets are losing mass was found to be accelerating rapidly. Each year over the course of the study, the two ice sheets lost a combined average of 36.3 gigatonnes more than they did the year before. In comparison, the 2006 study of mountain glaciers and ice caps estimated their loss at 402 gigatonnes a year on average, with a year-over-year acceleration rate three times smaller than that of the ice sheets.

"That ice sheets will dominate future sea level rise is not surprising -- they hold a lot more ice mass than mountain glaciers," said lead author Eric Rignot, jointly of NASA's Jet Propulsion Laboratory, Pasadena, Calif., and the University of California, Irvine. "What is surprising is this increased contribution by the ice sheets is already happening. If present trends continue, sea level is likely to be significantly higher than levels projected by the United Nations Intergovernmental Panel on Climate Change in 2007. Our study helps reduce uncertainties in near-term projections of sea level rise."

The study compared two independent measurement techniques. The first characterized the difference between two sets of data: interferometric synthetic aperture radar data from European, Canadian and Japanese satellites and radio echo soundings, which were used to measure ice exiting the ice sheets; and regional atmospheric climate model data from Utrecht University, The Netherlands, used to quantify ice being added to the ice sheets. The other technique used eight years of data from the NASA/German Aerospace Center's Gravity Recovery and Climate Experiment (Grace) satellites, which track minute changes in Earth's gravity field due to changes in Earth's mass distribution, including ice movement.

The team reconciled the differences between techniques and found them to be in agreement, both for total amount and rate of mass loss, over their data sets' eight-year overlapping period. This validated the data sets, establishing a consistent record of ice mass changes since 1992.

The team found that for each year over the 18-year study, the Greenland ice sheet lost mass faster than it did the year before, by an average of 21.9 gigatonnes a year. In Antarctica, the year-over-year speedup in ice mass lost averaged 14.5 gigatonnes.

"These are two totally independent techniques, so it is a major achievement that the results agree so well," said co-author Isabella Velicogna, also jointly with JPL and UC Irvine. "It demonstrates the tremendous progress that's being made in estimating how much ice the ice sheets are gaining and losing, and in analyzing Grace's time-variable gravity data."

The authors conclude that, if current ice sheet melting rates continue for the next four decades, their cumulative loss could raise sea level by 15 centimeters (5.9 inches) by 2050. When this is added to the predicted sea level contribution of 8 centimeters (3.1 inches) from glacial ice caps and 9 centimeters (3.5 inches) from ocean thermal expansion, total sea level rise could reach 32 centimeters (12.6 inches). While this provides one indication of the potential contribution ice sheets could make to sea level in the coming century, the authors caution that considerable uncertainties remain in estimating future ice loss acceleration.