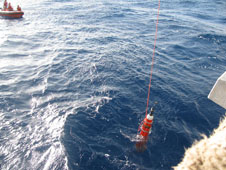 Researchers at NASA's Jet Propulsion Laboratory, Pasadena, Calif.; and the Scripps Institution of Oceanography, University of California, San Diego, completed the first three months of an ocean endurance test of the prototype vehicle off the coast of Hawaii in March.

"People have long dreamed of a machine that produces more energy than it consumes and runs indefinitely," said Jack Jones, a JPL principal engineer and SOLO-TREC co-principal investigator. "While not a true perpetual motion machine, since we actually consume some environmental energy, the prototype system demonstrated by JPL and its partners can continuously monitor the ocean without a limit on its lifetime imposed by energy supply."

"Most of Earth is covered by ocean, yet we know less about the ocean than we do about the surface of some planets," said Yi Chao, a JPL principal scientist and SOLO-TREC principal investigator. "This technology to harvest energy from the ocean will have huge implications for how we can measure and monitor the ocean and its influence on climate." 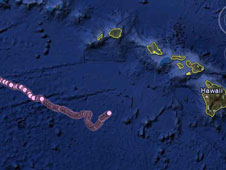 Plot map of the path of the SOLO-TREC autonomous underwater vehicle since its deployment south of Hawaii on Nov. 30, 2009. Image credit:NASA/JPL/SIO/NOAA/U.S. Navy/NGA/GEBCO/Google
› Larger image


SOLO-TREC draws upon the ocean's thermal energy as it alternately encounters warm surface water and colder conditions at depth. Key to its operation are the carefully selected waxy substances known as phase-change materials that are contained in 10 external tubes, which house enough material to allow net power generation. As the float surfaces and encounters warm temperatures, the material melts and expands; when it dives and enters cooler waters, the material solidifies and contracts. The expansion of the wax pressurizes oil stored inside the float. This oil periodically drives a hydraulic motor that generates electricity and recharges the vehicle's batteries. Energy from the rechargeable batteries powers the float's hydraulic system, which changes the float's volume (and hence buoyancy), allowing it to move vertically.

So far, SOLO-TREC has completed more than 300 dives from the ocean surface to a depth of 500 meters (1,640 feet). Its thermal recharging engine produced about 1.7 watt-hours, or 6,100 joules, of energy per dive, enough electricity to operate the vehicle's science instruments, GPS receiver, communications device and buoyancy-control pump.

The SOLO-TREC demonstration culminates five years of research and technology development by JPL and Scripps and is funded by the Office of Naval Research. JPL developed the thermal recharging engine, building on the buoyancy engine developed for the Slocum glider by Teledyne Webb Research, Falmouth, Mass. Scripps redesigned the SOLO profiling float and performed the integration. The 84-kilogram (183-pound) SOLO-TREC prototype was tested and deployed by the JPL/Scripps team on Nov. 30, 2009, about 161 kilometers (100 miles) southwest of Honolulu.

The performance of underwater robotic vehicles has traditionally been limited by power considerations. "Energy harvesting from the natural environment opens the door for a tremendous expansion in the use of autonomous systems for naval and civilian applications," said Thomas Swean, the Office of Naval Research program manager for SOLO-TREC. "This is particularly true for systems that spend most of their time submerged below the sea surface, where mechanisms for converting energy are not as readily available. The JPL/Scripps concept is unique in that its stored energy gets renewed naturally as the platform traverses ocean thermal gradients, so, in theory, the system has unlimited range and endurance. This is a very significant advance."

SOLO-TREC is now in an extended mission. The JPL/Scripps team plans to operate SOLO-TREC for many more months, if not years. "The present thermal engine shows the great promise in harvesting ocean thermal energy," said Russ Davis, a Scripps oceanographer. "With further engineering refinement, SOLO-TREC has the potential to augment ocean monitoring currently done by the 3,200 battery-powered Argo floats." The international Argo array, supported in part by the National Oceanic and Atmospheric Administration, measures temperature, salinity and velocity across the world's ocean. NASA and the U.S. Navy also plan to apply this thermal recharging technology to the next generation of submersible vehicles.