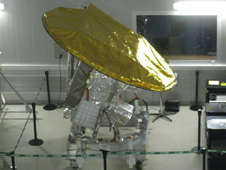 NASA's Aquarius instrument, and the Argentinian spacecraft that will carry it into space, the Satelite de Aplicaciones Cientificas (SAC-D), successfully rode out one of the largest earthquakes in recorded history Feb. 27 with no problems. The instrument and spacecraft are at the satellite systems contractor's satellite integration facility in Bariloche, Argentina. The city of Bariloche, located approximately 588 kilometers, or 365 miles, from the epicenter of the magnitude 8.8 earthquake, experienced light shaking, as indicated by the Modified Mercalli Intensity Scale, which evaluates the effects of earthquakes as experienced by people in the region. No damage was reported to the facility or spacecraft. A separate magnitude 6.3 earthquake in Salta, Argentina, later that day that was triggered by the Chile earthquake was too far away (1,900 kilometers or 1,200 miles) to be felt in Bariloche.

The JPL-built Aquarius instrument is at the Bariloche facility to be integrated with the SAC-D satellite.

Aquarius/SAC-D is an international mission between NASA and Argentina's space agency, Comisión Nacional de Actividades Espaciales. The primary instrument on the mission, Aquarius is designed to provide monthly global maps of how salt concentration varies on the ocean surface -- a key indicator of ocean circulation and its role in climate change. Seven Argentine space agency-sponsored instruments will provide environmental data for a wide range of applications, including natural hazards, land processes, epidemiological studies and air quality issues.

The minimum three-year mission is scheduled to launch late this year from Vandenberg Air Force Base, Calif.