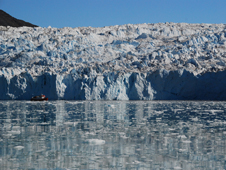 Glaciers in west Greenland are melting 100 times faster at their end points beneath the ocean than they are at their surfaces, according to a new NASA/university study published online Feb. 14 in Nature Geoscience. The results suggest this undersea melting caused by warmer ocean waters is playing an important, if not dominant, role in the current evolution of Greenland's glaciers, a factor that had previously been overlooked.

Researchers Eric Rignot and Isabella Velicogna, both of NASA's Jet Propulsion Laboratory, Pasadena, Calif., and the University of California, Irvine; along with colleague Michele Koppes of the University of British Columbia, Vancouver, Canada, measured the undersea melting rates of four glaciers in central west Greenland in the summer of 2008. They deployed oceanographic equipment in the glacier fjords, sampling the water at various depths to measure ocean currents, temperature and salinity, along with the depth of the fjords. The researchers found the melt rates of the glaciers studied was 100 times larger under the ocean at their terminus points than that observed at the glacial surfaces.

Rignot said the new study complements other recent research on the effects of ocean conditions in Greenland fjords. A study in the same online issue of Nature Geoscience by researcher Fiammetta Straneo of the Woods Hole Oceanographic Institution, Woods Hole, Mass., and colleagues looked at changes in oceanographic conditions in fjords that may be conducive to changes in undersea melting. Another 2008 Nature Geoscience study by researcher David Holland of New York University, New York, found that Greenland glaciers sped up as warm waters intruded into their fjords.

"Our study fills the gap by actually looking at these submarine melt rates, something that had never been done before in Greenland," Rignot said. "The results indicate rather large values that have vast implications for the evolution of the glaciers if ocean waters within these fjords continue to warm."

In recent years, scientists have observed a widespread acceleration of Greenland's glaciers, associated with thinning of their lower reaches as they reach the sea. In the past decade, surface melting of glaciers around Greenland due to warm air temperatures has increased in both magnitude and area, while snowfall has increased just slightly. The result is a tripling in the amount of ice mass lost in Greenland between 1996 and 2007. Of this loss, between 50 and 60 percent is attributable to a speedup in the flow of outlet glaciers, with the remainder due to increased surface melting.

But the glaciers also melt along their submerged faces, where they come into contact with warm ocean waters. A warmer ocean erodes a glacier's submerged, grounded ice and causes its grounding line -- the point at which a tidewater glacier floats free of its bed -- to retreat. Little is known about these rates of undersea melting and how they may influence the glaciers. The only previous measurements of undersea glacier melting were in Alaska.

The melting of glaciers beneath the ocean surface causes deep, warm, salty water to be drawn up toward the glacier's face, where it mixes turbulently with the glacier's cold, fresh water. The water then rises along the glacier face, melting its ice along the way, then reaches the ocean surface and flows away from the glacier in a plume. An ocean temperature of 3 degrees Celsius (37.4 degrees Fahrenheit) can melt glacial ice at a rate of several meters per day, or hundreds of meters over the course of a summer.

Rignot said the study points to the need to include the ocean factor if scientists are to increase the reliability of models used to predict how Greenland will be affected by climate change.

"All major Greenland glaciers end up in the ocean, and tidewater glaciers control 90 percent of the ice discharged by Greenland into the sea," Rignot said. "Submarine melting may therefore have a large indirect impact on the ice mass budget of the entire Greenland Ice Sheet. If we are to determine the future of the Greenland Ice Sheet more reliably in a changing climate, more complete and detailed studies of the interactions between ice and ocean at the ice sheet's margins are essential."