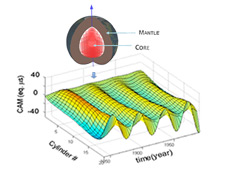 "Terra firma." It's Latin for "solid Earth." Most of the time, at least from our perspective here on the ground, Earth seems to be just that: solid. Yet the Earth beneath our feet is actually in constant motion. It moves through time and space, of course, along with the other objects in the universe, but it moves internally as well. The powerful forces of wind, water and ice constantly erode its surface, redistributing Earth's mass in the process. Within Earth's solid crust, faulting literally creates and then moves mountains. Hydrological changes, such as the pumping of groundwater for use by humans, cause the ground beneath us to undulate. Volcanic processes deform our planet and create new land. Landslides morph and scar the terrain. Entire continents can even rise up, rebounding from the weight of massive glaciers that blanketed the land thousands of years ago.

Indeed, the outermost layers of the celestial blue onion that is Earth-its crust and upper mantle-aren't very solid at all. But what happens if we peel back the layers and examine what's going on deep within Earth, at its very core?

Obviously, Earth's core is too deep for humans to observe directly. But scientists can use indirect methods to deduce what's going on down there. A new study in the journal Geophysical Research Letters, by Jean Dickey of NASA's Jet Propulsion Laboratory, Pasadena, Calif. and co-author Olivier deViron of the Institut de Physique du Globe de Paris, University Paris Diderot, Centre National de la Recherche Scientifique, Paris, has confirmed previous theoretical predictions that the churning cauldron of molten metals that make up Earth's liquid outer core is slowly being stirred by a very complex but predictable series of periodic oscillations. The findings give scientists unique insights into Earth's internal structure, the strength of the mechanisms responsible for generating Earth's magnetic field and its geology.

Peeling Back the Onion

In order to better understand what's going on inside our planet, it helps to first get a lay of the land, so to speak.

Next comes the mantle. The mantle is roughly solid, though very slow motion can be observed inside of it. It is about 2,900 kilometers (1,800 miles) thick, and is separated into an upper and lower mantle. It is here where most of Earth's internal heat is located. Large convective cells in the mantle circulate heat and drive the movements of Earth's tectonic plates, upon which our continents ride. The mantle is mainly composed of ferro-magnesium silicates.

Scientists believe Earth's magnetic field results from movements of molten iron and nickel within its liquid outer core. These flows, which are caused by interactions between Earth's core and its mantle, are neither even, nor evenly distributed. The electrical currents generated by these flows result in a magnetic field, which is similarly uneven, moves around in location and varies in strength over time. Earth's magnetic field is also slightly tilted with respect to Earth's axis. This causes Earth's geographic north and south poles to not line up with its magnetic north and south poles--they currently differ by about 11 degrees.

In just the last 200 million years alone, Earth's magnetic poles have actually reversed hundreds of times, with the most recent reversal taking place about 790,000 years ago. Scientists are able to reconstruct the chronology of these magnetic pole reversals by studying data on the spreading of the seafloor at Earth's mid-oceanic ridges. Unlike the doomsday scenario popularized by Hollywood in the movie "2012," however, such reversals don't occur over days, but rather on geologic timescales spanning hundreds to thousands of years-very short in geologic time but comparatively long in human time. The time span between pole reversals is even longer, ranging from 100,000 to several million years.

Earth's magnetic field is essential for life on Earth. Extending thousands of kilometers into space, it serves as a shield, deflecting the constant bombardment of charged particles and radiation known as the solar wind away from Earth. These solar winds would otherwise be fatal to life on Earth. At Earth's poles, the perpendicular angle of the magnetic field to Earth there allows some of these particles to make it into our atmosphere. This results in the Northern Lights in the northern hemisphere and the Southern Lights in the southern hemisphere.

Here on the ground, Earth's magnetic field has many practical applications to our everyday lives. It allows people to successfully navigate on land and at sea, making it a critical tool for commerce. Hikers use it to find their way. Archaeologists use it to deduce the age of ancient artifacts such as pottery, which, when fired, assumes the magnetic field properties that were present at the time of its creation. Similarly, the field of paleomagnetism uses magnetism to give scientists glimpses into Earth's remote past. In addition, geophysicists and geologists use geomagnetism as a tool to investigate Earth's structure and changes taking place in the Earth.

Getting to the Core of the Matter

Since Earth's liquid core is the primary source of Earth's magnetic field, scientists can use observations of the magnetic field at Earth's surface and its variability over time to mathematically calculate and isolate the approximate motions taking place within the core.

That's what Dickey and deViron did. They combined measurements of Earth's magnetic field taken by observatory stations on land and ships at sea dating back to 1840 with those of the Danish Oersted and German CHAMP geomagnetic satellite missions, both of which were supported by NASA investments. These measurements were then used as inputs for a complex model that employs statistical time series analyses to determine how fast liquid iron is flowing within Earth's core.

"Although we do not observe the core directly, it's amazing how much we can learn about Earth's interior using magnetic field observations," said Dickey.

In order to approximate the flow of liquid in the core, the scientists visualized its motion as a set of 20 rigid cylinders, each rotating about a common point that represents Earth's axis. "Imagine that each cylinder is slowly rotating at a different speed, and you'll get a sense of the complex churning that's taking place within Earth's core," Dickey said.

The scientists analyzed the data to identify common patterns of movement among the different cylinders. These patterns represent how momentum and energy are transferred from the liquid core-mantle interface inward through the liquid core toward the inner core with diminishing amplitudes.

Their analyses isolated six slow-moving oscillations, or waves of motion, occurring within the liquid core. The oscillations originated at the boundary between Earth's core and its mantle and traveled inward toward the inner core with decreasing strength. Four of these oscillations were robust, occurring at periods of 85, 50, 35 and 28 years. Since the scientist's data set goes back to 1840, the recurrence period of the longest oscillation (85 years) is less well determined than the other oscillations. The last two oscillations identified were weaker and will require further study.

The 85- and 50-year oscillations are consistent with a 1997 study by researchers Stephen Zatman and Jeremy Bloxham of Harvard University, Cambridge, Mass., who used a different analysis technique. A later purely theoretical study by Harvard researcher Jon Mound and Bruce Buffett of the University of Chicago in 2006 showed that there should be several oscillations of this type; their predicted periods agree with the first four modes identified in Dickey and deViron's study.

"Our satellite-based results are in excellent agreement with the previous theoretical and other studies in this field, providing a strong confirmation of the existence of these oscillations," said Dickey. "These results will give scientists confidence in using satellite measurements in the future to deduce long-term changes taking place deep within our restless planet."