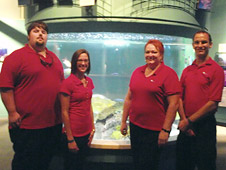 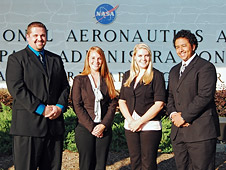 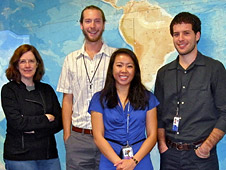 DEVELOP, a NASA Applied Sciences Program internship is moving beyond the conventional format of the traditional poster session and has brought the standard practice to a modern arena to reach a larger audience.

The program is in cooperation with the Institute of Electrical and Electronics Engineers (IEEE) and its Earthzine, an online publication.

DEVELOP research teams were able to interact with readers from around the world through a discussion feed active during the nearly three weeks the posters were live as part of competition between the 11 teams.

In the contest associated with the session, the virtual posters were judged for merit in scientific work, use of NASA Earth observations, dialogue with readers, and overall presentation quality and creativity. Of the 11 teams involved, three were recognized for outstanding work, with the first-place team receiving $450 for its achievement.

Second place and the People's Choice Award went to the Langley Research Center DEVELOP project, "Using NASA Earth Observations to Assess Burn Severity and Perform Risk Mapping of the 2011 Texas Wildfires," conducted by Kenneth Hall, Taylor Beard, Myles Boyd, and Ande Ehlen. This project partnered with the Texas Forest Service to use Earth observations from the Landsat 5, Aqua, and Terra missions to provide methods for making maps of burn severity, measurements of water level reductions due to drought, and assessments of ecological impacts.

In all, more than 5,000 visitors representing 89 countries viewed the poster presentations on Earthzine's site, leaving over 200 comments and more than 800 Facebook "likes."

The spring virtual poster presentation featuring the work of current DEVELOP interns will be hosted on Earthzine beginning March 22.