Grow Text SizeShrink Text Size
NASA Satellites Examine a Powerful Summer Storm
As a powerful summertime storm, known as a derecho, moved from Illinois to the Mid-Atlantic states on June 29, expanding and bringing destruction with it, NASA and other satellites provided a look at various factors involved in the event, its progression and its aftermath.


According to NOAA's Storm Prediction Center web site, a derecho (pronounced "deh-REY-cho") is a widespread, long-lived wind storm that is associated with a band of rapidly moving showers or thunderstorms. Damage from a derecho is usually in one direction along a relatively straight track. By definition an event is classified a derecho if the wind damage swath extends more than 240 miles (about 400 kilometers) and includes wind gusts of at least 58 mph (93 km/h) or greater along most of its length. 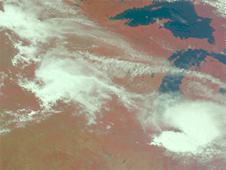 The AIRS images for June 29 show the crescent shape of the initial stage of the derecho as it gathered strength on the Michigan-Indiana-Ohio border and began its rapid eastward movement. The infrared image shows the high near-surface atmospheric temperatures blanketing the South and Midwest United States, approaching 98 F. Credit: NASA
› Larger image 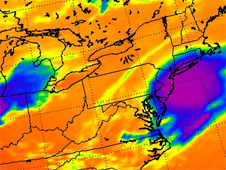 The AIRS images for June 30 show areas of intense convection centered off the New Jersey coast and another, less intense, system over Iowa/Indiana/Ohio. The area off the New Jersey coast is no longer a rapidly moving linear front. The near-surface atmospheric temperatures over the South and Midwest have decreased by 10 to 15 F in most areas. Credit: NASA
› Larger image 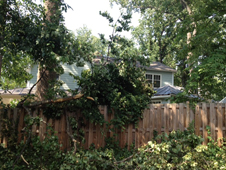 This photo of a downed tree was taken in Washington, D.C. The wind gusts of as much as 70 mph in the Washington area were responsible for countless downed trees and powerlines. Credit: Image copyright Kris Brown, used with permission
› Larger image

NOAA's GOES-13 satellite, which watches the movement of weather systems in the eastern half of the U.S., captured the expansion and movement of the derecho from its birthplace in Illinois. The satellite data was compiled and animated by the NASA GOES Project at the NASA Goddard Space Flight Center in Greenbelt, Md.

"It is interesting how the process is a self-sustaining process that is fed by a combination of atmospheric factors that all have to be in place at the same time," said Joe Witte, a meteorologist in Climate Change Communication at George Mason University, Va. and a consultant to NASA Headquarters, Washington. "That is why they are relatively rare: not all the elements line up that often."

Witte said that one could think of the strong winds as a combination to two main wind flows: the downburst winds from very high altitudes, and the forward speed of the storms.

A downburst occurs when cold air in the upper atmosphere is cooled more by the evaporation of some of the rain and melting of the frozen precipitation pushed up into the high levels of the towering cumulonimbus (thunderclouds). That cold air becomes much denser than the surrounding air and literally falls to the ground, accelerating like any other falling body. "The huge blob of very cold air from the upper atmosphere has a higher forward wind speed since it is high in the atmosphere, " Witte said. "This gives the 'blob' great forward momentum. Add that speed to the falling speed and the result is a very powerful forward moving surface wind."

The process of a derecho can become self-sustaining as hot and humid air is forced upward by the gust front and develops more (reinforcing) towering clouds. When one adds in a rear low level jet stream, there is nothing to stop the repeating process.

NASA's Aqua satellite flew over the derecho on June 29 and June 30, using the Atmospheric Infrared Sounder instrument (AIRS) onboard to capture infrared imagery of the event.

The AIRS images for June 29, shows the crescent shape of the initial stage of the derecho as it gathered strength on the Michigan-Indiana-Ohio border and began its rapid eastward movement. "The AIRS infrared image shows the high near-surface atmospheric temperatures blanketing the South and Midwestern U.S., approaching 98 degrees Fahrenheit," said Ed Olsen of the AIRS Team at NASA's Jet Propulsion Laboratory.

The AIRS images for June 30 show areas of intense convection centered off the New Jersey coast and another, less intense, system over Iowa-Indiana-Ohio. The area off the New Jersey coast is no longer a rapidly moving linear front. The near-surface atmospheric temperatures over the South and Midwest had decreased by 10 to 15 Fahrenheit in most areas," Olsen said.

Another NASA satellite captured the before and after effects of the derecho's impact on the power grid from Philadelphia, Pa., to Richmond, Va.

NASA’s Suomi National Polar-orbiting Partnership satellite (NPP) captured night-time images on June 28 and June 30, that reflected the massive blackouts that occurred after the derecho swept through the mid-Atlantic states.

Extensive power outages in Washington, D.C., and Baltimore were visible in NPP's night-time images on June 30, although clouds obscured lights from Philadelphia and other areas north and east of Baltimore. Of particular interest is the loss of light to the north and west of Washington along the Interstate 270 and Interstate 66 highways and Maryland Route 267.

Although this event seemed more like a 100-year storm, there was a powerful derecho event over the same states on July 4 and 5, 1980. The National Oceanic and Atmospheric Administration (NOAA) called the event "The More Trees Down Derecho." States affected by that even included Iowa, northeastern Missouri, Illinois, Indiana, Ohio, West Virginia, western Pennsylvania, northern and eastern Virginia, and Maryland. That derecho had wind gusts in excess of 80 mph at several points along the storm's path, and it took 73 lives.