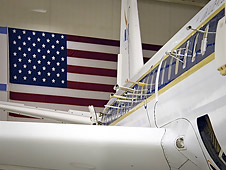 NASA researchers are about to fly off on a campaign that will take them into the heart of thunderstorm country.

The Deep Convective Clouds and Chemistry (DC3) field campaign will use an airport in Salina, Kan., as a base to explore the impact of large thunderstorms on the concentration of ozone and other substances in the upper troposphere. The campaign is being led by the National Center for Atmospheric Research in Boulder, Colorado, and is funded by the National Science Foundation (NSF) and NASA.

"Thunderstorms provide a mechanism for rapid lifting of air from the surface to higher altitudes in a matter of minutes to hours," said James Crawford of NASA's Langley Research Center in Hampton, Va., and a member of the mission's scientific steering committee.

"This allows molecules that are short-lived and more abundant near the surface to be transported to the upper troposphere in amounts that could not happen under normal atmospheric conditions," he said.

Additional chemical impacts come from the production of nitrogen oxides by lightning, but the details of these processes are not well understood. 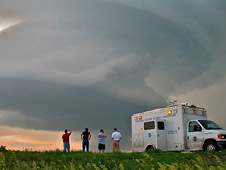 The DC3 mission is investigating the chemistry of thunderstorms, such as this one in Kansas being studied by a team from the National Oceanic and Atmospheric Administration (NOAA). Credit: NOAA

"All of this together has an influence on ozone in the coldest part of the atmosphere where it exerts the largest influence on climate," Crawford said. "Of the chemicals we'll be studying, nitrogen oxides in particular are key to the creation of ozone and are produced both naturally by lightning and by human activity through the burning of fossil fuels."

"We tend to associate thunderstorms with heavy rain and lightning, but they also shake things up at the top of cloud level," said NCAR scientist Chris Cantrell, a DC3 principal investigator. "Their impacts high in the atmosphere have effects on climate that last long after the storm dissipates."

During the mission, a NASA DC-8 carrying more than 20 instruments measuring scores of substances will make far-reaching flights out of Salina in coordination with a network of ground-based radar, lightning antenna stations and instrumentation in Colorado, Oklahoma and Alabama. The aircraft's home is Dryden Flight Research Center. 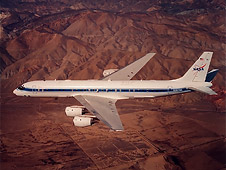 NASA's DC-8 will carry more than 20 instruments on the DC3 mission to investigation thunderstorms. Credit: NASA

The DC-8 is flying in tandem with the NSF/NCAR Gulfstream-V, a higher-flying aircraft able to more consistently reach the altitudes where outflow from deep convection deposits material.

The DC-8 will sample outflow when possible, but more importantly will focus on lower altitude inflow conditions, and on pre- and post-storm changes in how material is distributed with altitude. Its range will also enable it to sample outflow downwind of storms to examine chemical changes induced by the lifted material.

The principal investigators are from NCAR, Pennsylvania State University and Colorado State University, the National Oceanic and Atmospheric Administration, and numerous university and partners and international collaborators. German scientists will bring yet a third plane, a Dassault Falcon.

The DC3 mission is related to another airborne campaign examining the role of deep convection in transporting material from the surface to the upper atmosphere. The DC-8 and Gulfstream-V will both participate in the Southeast Asia Composition, Cloud, Climate Coupling Regional Study (SEAC4RS) mission that will take place in August and September this year from a base in Thailand.