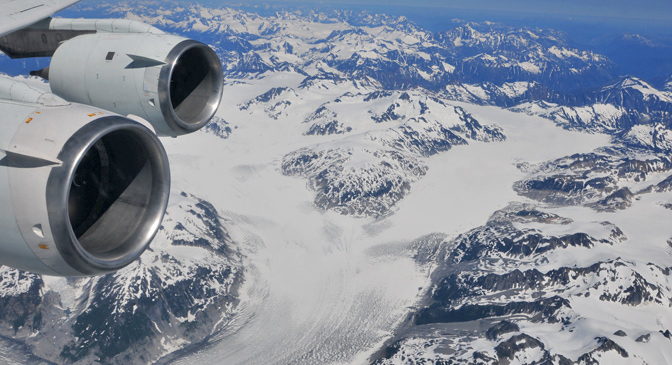 This spectacular view of a large glacier in British Columbia, Canada, was captured from NASA's DC-8 flying laboratory during one of the ASCENDS II atmospheric sampling instrument validation flights. (NSERC / Emily Schaller) 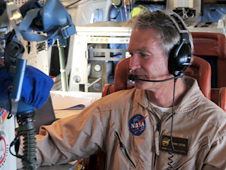 The focus of this mission, which is funded by the Earth Science division of NASA's Science Mission Directorate, is the further development of laser-based Earth-observing satellite instruments designed to measure atmospheric carbon dioxide.

"Satellite instruments start in a laboratory and mature to a point where they need to be used in the atmosphere," said DC-8 project manager Frank Cutler at NASA’s Dryden Aircraft Operations Facility in Palmdale, Calif. "The cheapest way to test is first on the ground and then to get the instruments into the air for in-flight analysis.

"The DC-8 flying laboratory is often used to facilitate these assessments," Cutler added. "It is interesting to observe what an instrument that will fly on a satellite goes through to be certified for operational use."

During an instrument-validation flight over central California, the DC-8 first flew descending and ascending spiral patterns above the Castle Airport area near Merced to take sample gas measurements with the truth instruments. The laser instruments were then flown over the airport at various altitudes up to 40,000 feet so that their data could be compared with that of the truth instruments. 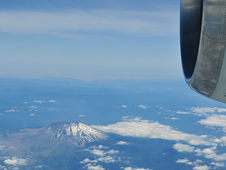 The lofty peak of Mount St. Helens in Washington state dominates the landscape in this view from NASA's DC-8 flying laboratory during one of the ASCENDS II atmospheric sampling instrument validation flights. (NSERC / Emily Schaller) The aircraft flies the instruments over different land surfaces, from snow and ice to oceans, forests and deserts, to test the surface reflectance effects on each instrument's performance. These are the same types of surfaces that a laser instrument would find when studying components of the Earth’s atmosphere from space.

Additional flights will take the aircraft over the California and Nevada deserts and offshore over the Pacific Ocean. During an early August flight to British Columbia, Canada, the instruments collected data over snowfields in mountainous regions. The aircraft will also deploy briefly to Minneapolis and St. Paul, Minn., to fly over atmospheric radiation measurement sites for comparison of airborne to ground-based measurements.

"Conducting unique flight experiments on the DC-8 is very exciting and is as close as many of us will get to being a modern day explorer," said ASCENDS II mission scientist Edward Browell of NASA’s Langley Research Center in Hampton, Va., who has conducted more than 25 DC-8 science missions around the world since 1987.