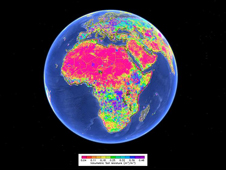 The AMSR-E satellite instrument captured data over Africa on April 7, 2004 from which this image of global root-zone soil moisture was produced. The data overlays a Google Earth map of the entire continent, with warmer colors of pink, orange and yellow depicting lower levels of moisture and cooler colors of green and blue and purple indicating higher levels of moisture in the soil. Credit: NASA and Google Earth
> Larger image 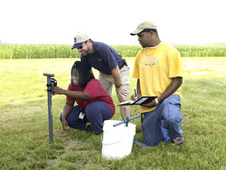 The AMSR-E instrument delivers global soil moisture observations to combat poor data coverage in some regions due to sparsely located ground-based sensors like the one in this photograph. Credit: NASA JPL
> Larger image Soil moisture is essential for seeds to germinate and for crops to grow. But record droughts and scorching temperatures in certain parts of the globe in recent years have caused soil to dry up, crippling crop production. The falling food supply in some regions has forced prices upward, pushing staple foods out of reach for millions of poor people.

NASA researchers are using satellite data to deliver a kind of space-based humanitarian assistance. They are cultivating the most accurate estimates of soil moisture – the main determinant of crop yield changes – and improving global forecasts of how well food will grow at a time when the world is confronting shortages.

During a presentation this week at the the Joint Assembly of the American Geophysical Union in Toronto, NASA scientist John Bolten described a new modeling product that uses data from the Advanced Microwave Scanning Radiometer for EOS (AMSR-E) sensor on NASA’s Aqua satellite to improve the accuracy of West African soil moisture. The group produced assessments of current soil moisture conditions, or "nowcasts," and improved estimates by 5 percent over previous methods. Though seemingly small and incremental, the increase can make a big difference in the precision of crop forecasts, Bolten said.

The modeling innovation comes at a time when crop analysts at agencies like the U.S. Department of Agriculture (USDA) are working to meet the food shortage problem head on. They combine soil moisture estimates with weather trends to produce up-to-date forecasts of crop harvests. Those estimates help regional and national officials prepare for and prevent food crises.

“The USDA’s estimates of global crop yields are an objective, timely benchmark of food availability and help drive international commodity markets,” said Bolten, a physical scientist at NASA’s Goddard Space Flight Center, Greenbelt, Md. “But crop estimates are only as good as the observations available to drive the models."

Crop analysts must estimate root-zone soil moisture, the amount of water beneath the surface available for plants to absorb. But estimating the amount of water in soil has posed challenges. Ground-level sensors for rainfall and temperature -- the two key elements for estimating soil moisture – are often sparsely located in the developing nations that need them the most. Hard-to-reach terrain like mountains or desert, lack of local cooperation as well as high maintenance costs, can lead to sensors more than 500 miles apart.

Under a new NASA-USDA collaboration known as the Global Agriculture Monitoring Project, Bolten and colleagues from the USDA’s Agricultural Research Service are using AMSR-E to fill the data gaps with daily soil moisture “snapshots.” Since its launch in 2002, the instrument has “seen” through clouds, and light vegetation like crops and grasses to detect the amount of soil moisture beneath Earth's surface.

Following a test of their system over the United States, Bolten’s team tracked West African rainfall, temperature, and model assessments of soil moisture with and without the AMSR-E satellite sensor observations. They used West Africa as a model because the landscape provides varying cover, from desert and semi-arid landscape in the north to grasslands, lush forests, and crop land to the south. Rainfall in the region is highly variable yet sparsely monitored by ground-based sensors. They also targeted West Africa to demonstrate the possibility for improving the assessment of drought-caused food shortages on the region’s dense population.

By definition, the severity of agricultural drought is determined by root-zone soil water content. So Bolten’s satellite-driven boost to root-zone soil moisture prediction also directly improves drought monitoring. And Bolten says results from AMSR-E are just a precursor to dramatic new improvements in data and prediction accuracy researchers expect from the Soil Moisture Active and Passive satellite, slated to launch in 2013.

Food reserves are at their lowest level in 30 years, according to the United Nations World Food Program, putting the world’s 1 billion poorest people most at risk. Prices for wheat, rice, and corn have more than doubled in the last 24 months, hitting countries like Haiti, Bangladesh, and Burkina Faso the hardest. And the U.S. is not unaffected -- drought in 2008 led to an estimated $1.1 billion in crop losses in Texas alone.

“This advance is making it possible for us to do our job in a more precise way,” said Curt Reynolds, a crop analyst for the USDA’s Foreign Agricultural Service in Washington. “We plan to make NASA’s soil moisture information available to commodity markets, traders, agricultural producers, and policymakers through our Crop Explorer Web site.”