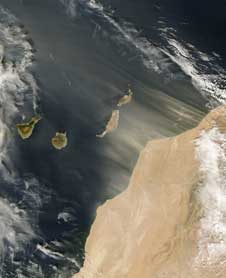 Saharan dust blows off the west coast of Africa and over the Canary Islands in this image captured Nov. 11, 2006 by an instrument aboard NASA's Terra satellite. NASA researchers have linked similar seasonal dust storms from the Sahara Desert to the cooling of North Atlantic surface temperatures. Credit: NASA
> Click for larger image.

NASA satellites have provided evidence that the chilling effect of dust was responsible for one-third of the drop in North Atlantic sea surface temperatures between June 2005 and 2006, possibly contributing to the difference in hurricane activity between the two seasons.

Heat from warm ocean surfaces is known to fuel hurricanes, leading to stronger and more frequent storms. During the hurricane season of 2006, however, sea surface temperatures in the North Atlantic remained relatively cool and the season saw only five hurricanes, compared to 15 hurricanes in 2005 when the ocean surface was warmer.

Now, William Lau and Kyu-Myong Kim at NASA's Goddard Space Flight Center, Greenbelt, Md., show that airborne Saharan dust over the Atlantic was likely responsible for much of the temperature drop, effectively blocking sunlight from reaching the ocean's surface. According to their research dust accounted for 30 to 40 percent of the drop in sea surface temperature between June 2005 and 2006, the team reported this month in the American Geophysical Union's Geophysical Research Letters. The finding provides the first quantitative estimate of dust's role in cooling the entire North Atlantic and brings attention to dust as a potentially important influence on hurricane activities.

In research published earlier this year, Lau first suggested that Saharan dust blowing west over the Atlantic blocked sunlight from reaching the ocean, which caused the ocean surface to cool and led 2006 to be a much weaker hurricane season than 2005. The idea sparked controversy and scientists questioned the extent of dust's influence on temperature shifts compared to the influence of El Niño.

"Previous studies have looked at how hot, dry air associated with a Saharan dust outbreak affects an individual storm, but our study is the first to focus on dust's radiative effect on sea surface temperatures, which may affect storms for the entire season. Nobody had suggested that link before," Lau says.

Sea surface temperatures in June 2006 were cooler than the year before in the North Atlantic, where dust storms from Africa can stop sunlight from warming the ocean's surface. This global view created from June 2006 data shows where sea surface temperatures were cool (blue) and which regions were warm (light pink). Credit: NASA To investigate the dust and sea surface temperature link, Lau and Kim calculated the cooling pattern that Saharan dust should produce on sea surface temperatures from the sun-blocking effect and compared the results to observed temperature patterns. The NASA team first collected data from the National Center for Environmental Prediction to find out how much solar energy enters Earth's atmosphere and reaches Earth's surface free from the influence of dust. As the energy radiates down toward the ocean's surface, however, not all it survives the trip – a portion is either absorbed or reflected by the dust and clouds.

Knowing the concentration of atmospheric dust as measured by the Moderate Resolution Imaging Spectroradiometer (MODIS) instrument onboard a NASA satellite, Lau and Kim calculated the amount of heat that could penetrate the dust and reach the surface of the North Atlantic. The team used a computer simulation of the upper ocean to estimate how much the observed heat reaching the ocean would change sea surface temperature.

The expected temperature pattern turned out to closely match observations, supporting a link between dust and sea surface temperatures. Results showed that the sunlight-blocking effect of Saharan dust caused a cooling of the North Atlantic of 0.37 to 0.72 degrees Fahrenheit between June 2005 and 2006, approximately one-third of the total sea surface cooling in the North Atlantic.

As dust storms peak early in the hurricane season, researchers might one day incorporate dust data into forecasts to better predict sea surface temperatures and possibly the formation of hurricanes. Still, dust in 2006 accounted for less than half of the sea surface temperature change, leaving open significant influences from other factors such as El Niño, surface evaporation and wind.

"We're not saying that El Niño does not have a substantial influence on sea surface temperatures, but rather that dust is an important factor that we cannot ignore anymore. The 2007 hurricane season appears to be another one in which forecasts for an above normal hurricane season have failed," Lau says.