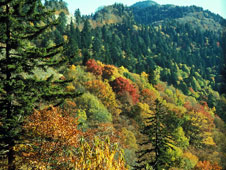 › View larger image
A new NASA modeling effort found that in a doubled-carbon dioxide world plant growth could lessen global warming by about 0.3 degrees C globally. The same model found that the world would warm by 1.94 degrees C without this cooling feedback factored in. Image: Great Smoky Mountains National Park; Credit: National Park Service A new NASA computer modeling effort has found that additional growth of plants and trees in a world with doubled atmospheric carbon dioxide levels would create a new negative feedback – a cooling effect – in the Earth's climate system that could work to reduce future global warming.

The cooling effect would be -0.3 degrees Celsius (C) (-0.5 Fahrenheit (F)) globally and -0.6 degrees C (-1.1 F) over land, compared to simulations where the feedback was not included, said Lahouari Bounoua, of Goddard Space Flight Center, Greenbelt, Md. Bounoua is lead author on a paper detailing the results that will be published Dec. 7 in the journal Geophysical Research Letters.

Without the negative feedback included, the model found a warming of 1.94 degrees C globally when carbon dioxide was doubled.

Bounoua stressed that while the model's results showed a negative feedback, it is not a strong enough response to alter the global warming trend that is expected. In fact, the present work is an example of how, over time, scientists will create more sophisticated models that will chip away at the uncertainty range of climate change and allow more accurate projections of future climate.

"This feedback slows but does not alleviate the projected warming," Bounoua said.

To date, only some models that predict how the planet would respond to a doubling of carbon dioxide have allowed for vegetation to grow as a response to higher carbon dioxide levels and associated increases in temperatures and precipitation. 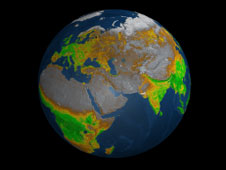 › View animation
This animation shows seasonal vegetation changes on Earth in 2004, created using NASA satellite data. It is an animation of what is called the Normalized Vegetation Difference Index, which provides an indication of the health of plant life on Earth. Source: Scientific Visualization Studio, Goddard Space Flight Center Of those that have attempted to model this feedback, this new effort differs in that it incorporates a specific response in plants to higher atmospheric carbon dioxide levels. When there is more carbon dioxide available, plants are able to use less water yet maintain previous levels of photosynthesis. The process is called "down-regulation." This more efficient use of water and nutrients has been observed in experimental studies and can ultimately lead to increased leaf growth. The ability to increase leaf growth due to changes in photosynthetic activity was also included in the model. The authors postulate that the greater leaf growth would increase evapotranspiration on a global scale and create an additional cooling effect.

"This is what is completely new," said Bounoua, referring to the incorporation of down-regulation and changed leaf growth into the model. "What we did is improve plants' physiological response in the model by including down-regulation. The end result is a stronger feedback than previously thought."

The modeling approach also investigated how stimulation of plant growth in a world with doubled carbon dioxide levels would be fueled by warmer temperatures, increased precipitation in some regions and plants' more efficient use of water due to carbon dioxide being more readily available in the atmosphere. Previous climate models have included these aspects but not down-regulation. The models without down-regulation projected little to no cooling from vegetative growth.

Scientists agree that in a world where carbon dioxide has doubled – a standard basis for many global warming modeling simulations – temperature would increase from 2 to 4.5 degrees C (3.5 to 8.0 F). (The model used in this study found warming – without incorporating the plant feedback – on the low end of this range.) The uncertainty in that range is mostly due to uncertainty about "feedbacks" – how different aspects of the Earth system will react to a warming world, and then how those changes will either amplify (positive feedback) or dampen (negative feedback) the overall warming.

An example of a positive feedback would be if warming temperatures caused forests to grow in the place of Arctic tundra. The darker surface of a forest canopy would absorb more solar radiation than the snowy tundra, which reflects more solar radiation. The greater absorption would amplify warming. The vegetative feedback modeled in this research, in which increased plant growth would exert a cooling effect, is an example of a negative feedback. The feedback quantified in this study is a result of an interaction between all these aspects: carbon dioxide enrichment, a warming and moistening climate, plants' more efficient use of water, down-regulation and the ability for leaf growth.

This new paper is one of many steps toward gradually improving overall future climate projections, a process that involves better modeling of both warming and cooling feedbacks.

"As we learn more about how these systems react, we can learn more about how the climate will change," said co-author Forrest Hall, of the University of Maryland-Baltimore County and Goddard Space Flight Center. "Each year we get better and better. It's important to get these things right just as it's important to get the track of a hurricane right. We've got to get these models right, and improve our projections, so we'll know where to most effectively concentrate mitigation efforts."

The results presented here indicate that changes in the state of vegetation may already be playing a role in the continental water, energy and carbon budgets as atmospheric carbon dioxide increases, said Piers Sellers, a co-author from NASA's Johnson Space Center, Houston, Texas.

"We're learning more and more about how our planet really works," Sellers said. "We have suspected for some time that the connection between vegetation photosynthesis and the surface energy balance could be a significant player in future climate. This study gives us an indication of the strength and sign of one of these biosphere-atmosphere feedbacks."