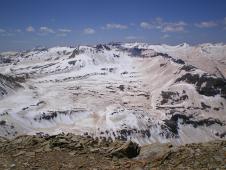 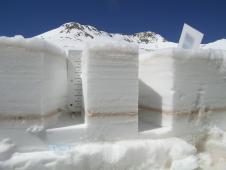 Snow pits like this one, dug in the mountains of the Upper Colorado River basin, were used to study the layering of dust in snowfields and its impact on the absorption of sunlight. Image credit: Center for Snow and Avalanche Studies
› Full image and caption 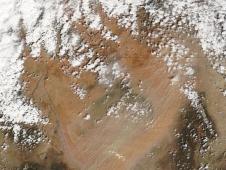 PASADENA, Calif. – Snowmelt in the Colorado River basin is occurring earlier, reducing runoff and the amount of crucial water available downstream. A new study shows this is due to increased dust caused by human activities in the region during the past 150 years.

The study, led by a NASA scientist and funded by the agency and the National Science Foundation, showed peak spring runoff now comes three weeks earlier than before the region was settled and soils were disturbed. Annual runoff is lower by more than five percent on average compared to pre-settlement levels.

The findings have major implications for the 27 million people in the seven U.S. states and Mexico who rely on the Colorado River for drinking, agricultural and industrial water. The results were published in this week's Proceedings of the National Academy of Sciences.

The research team was led by Tom Painter, a snow hydrologist at both NASA's Jet Propulsion Laboratory in Pasadena, Calif., and UCLA. The team examined the impact of human-produced dust deposits on mountain snowpacks over the Upper Colorado River basin between 1915 and 2003. Studies of lake sediment cores showed the amount of dust falling in the Rocky Mountains increased by 500 to 600 percent since the mid-to-late 1800s, when grazing and agriculture began to disturb fragile but stable desert soils.

The team used an advanced hydrology model to simulate the balance of water flowing into and out of the river basin under current dusty conditions, and those that existed before soil was disturbed. Hydrologic data gathered from field studies funded by NASA and the National Science Foundation, and measurements of the absorption of sunlight by dust in snow, were combined with the modeling.

More than 80 percent of sunlight falling on fresh snow is typically reflected back into space. In the semi-arid regions of the Colorado Plateau and Great Basin, winds blow desert dust east, triggering dust-on-snow events. When dark dust particles fall on snow, they reduce its ability to reflect sunlight. The snow also absorbs more of the sun's energy. This darker snow cover melts earlier, with some water evaporating into the atmosphere.

Earlier melt seasons expose vegetation sooner, and plants lose water to the atmosphere through the exhalation of vapor. The study shows an annual average of approximately 35-billion cubic feet of water is lost from this exhalation and the overall evaporation that would otherwise feed the Colorado River. This is enough water to supply Los Angeles for 18 months.

"The compressed mountain runoff period makes water management more difficult than a slower runoff," Painter said. "With the more rapid runoff under dust-accelerated melt, costly errors are more likely to be made when water is released from and captured in Colorado River reservoirs."

Prior to the study, scientists and water managers had a poor understanding of dust-on-snow events. Scientists knew from theory and modeling studies that dust could be changing the way snowfields reflect and absorb sunlight, but no one had measured its full impact on snowmelt rates and runoff over the river basin. The team addressed these uncertainties by making systematic measurements of the sources, frequency and snowmelt impact of dust-on-snow events.

"These researchers brought together their collective expertise to provide a historical context for how the Colorado River and its runoff respond to dust deposition on snow," said Anjuli Bamzai, program director in the National Science Foundation's Division of Atmospheric and Geospace Sciences in Arlington, Va. "The work lays the foundation for future sound water resource management."

Painter believes steps can be taken to reduce the severity of dust-on-snow events in the Colorado River basin. He points to the impact of the Taylor Grazing Act of 1934 for potential guidance on how dust loads can be reduced. The act regulated grazing on public lands to improve rangeland conditions. Lake sediment studies show it decreased the amount of dust falling in the Rocky Mountains by about one quarter.

"Restoration of desert soils could increase the duration of snow cover, simplifying water management, increasing water supplies and reducing the need for additional reservoir storage of water. Peak runoff under cleaner conditions would then come later in summer, when agricultural and other water demands are greater," Painter said.

"It could also at least partially mitigate the expected regional impacts of climate change, which include reduced Colorado River flows, increased year-to-year variability in its flow rate, and more severe and longer droughts," he added. "Climate models project a seven to 20 percent reduction in Colorado River basin runoff in this century due to climate change."

Other institutions participating in the study include the National Snow and Ice Center in Boulder, Colo.; U.S. Geological Survey Southwest Biological Center in Moab, Utah; University of Washington in Seattle; Center for Snow and Avalanche Studies in Silverton, Colo.; and the University of Colorado-NOAA Western Water Assessment in Boulder.

For more information about NASA and agency programs, visit: http://www.nasa.gov . JPL is managed for NASA by the California Institute of Technology in Pasadena.