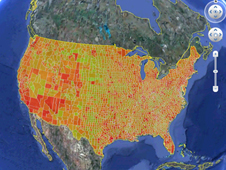 Through Google Earth, the public can access Vulcan Project data that shows the output in 2002 of fossil fuel carbon dioxide at the level of individual plants located around the country, like the emissions from this one in Gibson, Ind. Credit: Purdue University/Google Earth
> Larger image 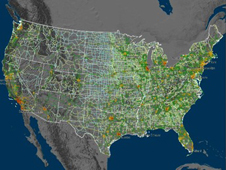 Credit: Purdue University/Kevin Gurney
> Video about U.S. CO2 emissions
> Flow of C02 into the Air
> 3D View of CO2 Over the U.S.
> U.S. CO2 emissions in Jan. 2002 Interactive maps that detail carbon dioxide emissions from fossil fuel combustion are now available on the popular Google Earth platform. The maps, funded by NASA and the U.S. Department of Energy through the joint North American Carbon Program, can display fossil fuel emissions by the hour, geographic region, and fuel type.

Researchers from the project, named "Vulcan" for the Roman god of fire, constructed an unprecedented inventory of the carbon dioxide that results from the burning of 48 different types of fossil fuel. The data-based maps show estimates of the hourly carbon dioxide outputs of factories, power plants, vehicle traffic and residential and commercial areas.

First released to the scientific community in April 2007, the emissions data have now been integrated into an image-based format that has become a standard online viewing tool for content that spans broad geographic areas.

“The release of the Vulcan inventory on Google Earth brings this information into the living room of anyone with an Internet connection," said Kevin Gurney, an assistant professor of Earth and atmospheric sciences at Purdue and leader of the Vulcan Project. "From a societal perspective, Vulcan provides a description of where and when society influences climate change through fossil-fuel carbon dioxide emissions."

"Users can see their county or state in relation to others, and see what aspects of economic activity are driving fossil-fuel emissions,” Gurney added. "Vulcan could help demystify climate change and empower people in the same way as seeing the miles-per-gallon number on the dashboard of a hybrid car.”

The new Vulcan maps assimilate fossil-fuel carbon dioxide emissions data that was previously available from disparate sources and in different formats into one comprehensive data product. The fine level of detail offers more accuracy for estimating the fossil fuel contribution to the global carbon budget, the balance of carbon absorbed by Earth and released into the atmosphere. The Vulcan data product provides new scientific opportunities to assess the relationship between fossil fuel emissions and climate in the atmosphere and to see what future variability and extremes may bring.

“One of the goals of the U.S. Climate Change Science Program is to assist with scientifically based formulation of policy and decision making,” said Peter Griffith, director of the Carbon Cycle and Ecosystems Office at NASA's Goddard Space Flight Center, and coordinator of the North American Carbon Program. “By allowing non-specialists to see changes in carbon dioxide emissions in time and across broad areas, we’re helping them to understand critical information for climate change policy decisions.”

Vulcan Project data and maps will complement observations from the Atmospheric Infrared Sounder on NASA’s Aqua spacecraft and the upcoming Orbiting Carbon Observatory, which is set to launch next week. This mission will use space-based instruments to precisely make the first global measurements of atmospheric carbon dioxide with the accuracy and geographic coverage required to improve estimates of the sources and sinks of the greenhouse gas.

Gurney and colleagues now have a second phase of NASA-funded work underway to create similar inventories of carbon dioxide emissions for Canada and Mexico.