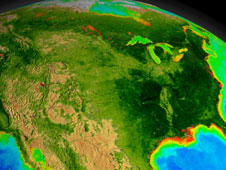 Satellite observations of vegetation on land and microscopic marine plants that form the base of ocean food chains are some of the NASA datasets that will be used in the new studies. Credit: NASA 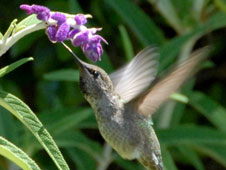 Hummingbirds are highly sensitive to climate and weather and are a pioneer indicator of the affects of climate change. Credit: NASA/Jenny Mottar 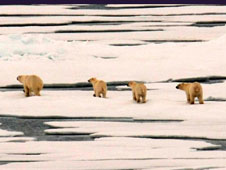 One of the new studies will investigate how climate change and sea ice loss are affecting polar bear populations in Greenland. Credit: NASA/Karen Frey

What do polar bears, hummingbirds, clams, bowhead whales and invasive plant species have to do with Earth science spacecraft orbiting overhead 24/7? Soon observations from NASA's Earth-observing satellites of our planet's climate will be brought to bear on understanding how different species and ecosystems respond to climate changes and developing tools to better manage wildlife and natural resources.

NASA has joined with the U.S. Geological Survey, National Park Service, U.S. Fish and Wildlife Service and Smithsonian Institution to initiate new research and applications efforts that will bring the global view of climate from space down to Earth to benefit wildlife and key ecosystems.

This is the first time NASA has targeted research investigating the intersection of climate and biological studies. The projects are sponsored by the Earth Science Division in NASA's Science Mission Directorate.

The wildlife species to be studied include polar bears in Greenland, bowhead whales in the Arctic Ocean, and migratory birds and waterfowl in the United States. Other studies will focus on species of commercial interest such as clams, oysters and other bivalves in U.S. coastal waters, and Atlantic bluefin tuna in the Gulf of Mexico.

To learn more about climatic effects on plants, researchers will focus on the loss of cordgrass marshes in coastal wetlands of the southeastern states. They also will examine the stresses to native tree species, many of commercial value, across the western states and Canada.

"We know very little about how the majority of species and ecosystems will respond to environmental changes related to changing climates," said Woody Turner, manager of NASA's Ecological Forecasting program in Washington. "These projects bring together NASA's global satellite data of the physical environment with ground-based data on specific species and ecosystems and computer modeling to detect and understand biological responses to climate."

The studies will use long-term observations of Earth from space, including data on sea surface temperature, vegetation cover, rainfall, snow cover, sea ice and the variability in the microscopic marine green plants that form the base of ocean food chains.

Below are the 15 new projects and their principal investigators: