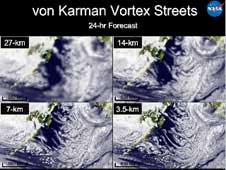 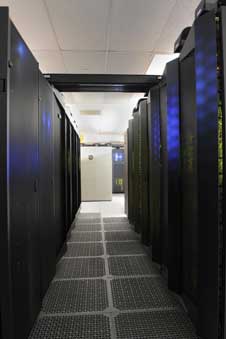 > View larger image
Goddard Space Flight Center recently added 4,128 processors to its Discover high-end computing system, with another 4,128 processors to follow this fall. The expanded Discover will host NASA’s climate simulations for the Intergovernmental Panel on Climate Change. Credit: NASA/Pat Izzo Remember the day you got a brand-new computer? Applications snapped open, processes that once took minutes finished in seconds, and graphics and animation flowed as smoothly as TV video. But several months and many new applications later, the bloom fell off the rose.

Your lightning-fast computer no longer was fast. You needed more memory and faster processors to handle the gigabytes of new files now embedded in your machine.

They, too, need more powerful computers to process the sophisticated computer models used in climate forecasts. Such an expanded capability is now being developed at NASA’s Goddard Space Flight Center in Greenbelt, Md.

In August, Goddard added 4,128 new-generation Intel "Nehalem" processors to its Discover high-end computing system. The upgraded Discover will serve as the centerpiece of a new climate simulation capability at Goddard. Discover will host NASA’s modeling contributions to the Intergovernmental Panel on Climate Change (IPCC), the leading scientific organization for assessing climate change, and other national and international climate initiatives.

To further enhance Discover’s capabilities, Goddard will install another 4,128 Nehalem processors in the fall, bringing Discover to 15,160 processors.

According to CISTO lead architect Dan Duffy, the Nehalem architecture is especially well-suited to climate studies. "Speed is an inherent advantage for solving complex problems, but climate models also require large memory and fast access to memory," he said. Each processor has 3 gigabytes of memory, among the highest available today. In addition, memory access is three to four times faster than Discover’s previous-generation processors.

For instance, "features such as well-defined hurricane eyewalls and convective cloud clusters appeared for the first time," said William Putman, acting lead of the Advanced Software Technology Group in Goddard’s Software Integration and Visualization Office. "At these cloud-permitting resolutions, the differences are stunning."

For the IPCC studies, scientists will run both longer-term and shorter-term climate projections using different computer models. A climate model from the Goddard Institute for Space Studies will perform simulations going back a full millennium and forward to 2100. Goddard’s Global Modeling and Assimilation Office will use a climate model for projections of the next 30 years and an atmospheric chemistry-climate model for short-term simulations of chemistry-climate feedbacks. The IPCC will use information from climate simulations such as these in its Fifth Assessment Report, which IPCC expects to publish in 2014.