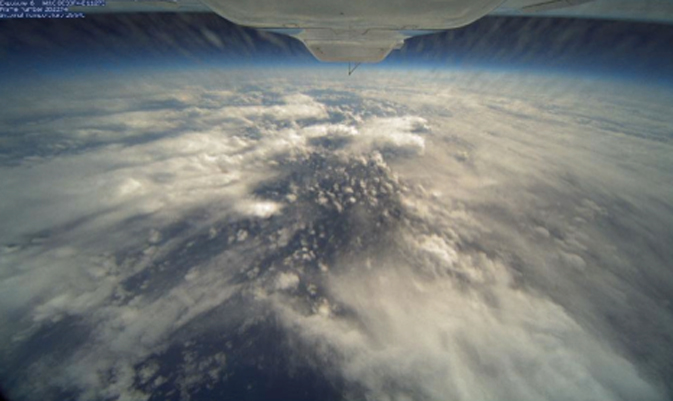 MOFFETT FIELD, Calif. – Starting this month, NASA will send a remotely piloted research aircraft as high as 65,000 feet over the tropical Pacific Ocean to probe unexplored regions of the upper atmosphere for answers to how a warming climate is changing Earth.

The first flights of the Airborne Tropical Tropopause Experiment (ATTREX), a multi-year airborne science campaign with a heavily instrumented Global Hawk aircraft, will take off from and be operated by NASA's Dryden Flight Research Center at Edwards Air Force Base in California. The Global Hawk is able to make 30-hour flights.

Water vapor and ozone in the stratosphere can have a large impact on Earth's climate. The processes that drive the rise and fall of these compounds, especially water vapor, are not well understood. This limits scientists' ability to predict how these changes will influence global climate in the future. ATTREX will study moisture and chemical composition in the upper regions of the troposphere, the lowest layer of Earth's atmosphere. The tropopause layer between the troposphere and stratosphere, 8 miles to 11 miles above Earth's surface, is the point where water vapor, ozone and other gases enter the stratosphere.

Studies have shown even small changes in stratospheric humidity may have significant climate impacts. Predictions of stratospheric humidity changes are uncertain because of gaps in the understanding of the physical processes occurring in the tropical tropopause layer. ATTREX will use the Global Hawk to carry instruments to sample this layer near the equator off the coast of Central America.

“The ATTREX payload will provide unprecedented measurements of the tropical tropopause layer,” said Eric Jensen, ATTREX principal investigator at NASA’s Ames Research Center in Moffett Field, Calif. “This is our first opportunity to sample the tropopause region during winter in the Northern Hemisphere when the region is coldest and extremely dry air enters the stratosphere.”

Led by Jensen and project manager Dave Jordan of Ames, ATTREX scientists installed 11 instruments in the Global Hawk. The instruments include remote sensors for measuring clouds, trace gases and temperatures above and below the aircraft, as well as instruments to measure water vapor, cloud properties, meteorological conditions, radiation fields and numerous trace gases around the aircraft. Engineering test flights conducted in 2011 ensured the aircraft and instruments operated well at the very cold temperatures encountered at high altitudes in the tropics, which can reach minus 115 degrees Fahrenheit.

Six science flights are planned between Jan. 16 and March 15. The ATTREX team also is planning remote deployments to Guam and Australia in 2014. Scientists hope to use the acquired data to improve global model predictions of stratospheric humidity and composition.

ATTREX is one of several active science missions that will be featured during a NASA Airborne Science Mission media day at Dryden on Jan. 25. Reporters interested in attending should submit requests for credentials to Dryden's Public Affairs Office by Jan. 11, either by email at DrydenPAO@nasa.gov or by telephone at 661-276-3449. Media representatives wishing to participate must be U.S. citizens or permanent resident aliens on assignment from a verifiable media organization. No substitutions of non-credentialed personnel will be allowed.

For more information about the ATTREX mission, click here.

For the media, a digital press kit is available.