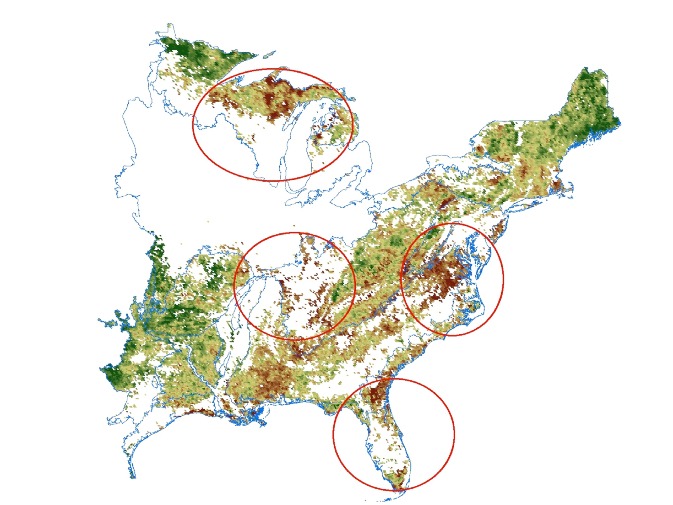 Trends in forest canopy green cover over the eastern United States from 2000 to 2010 derived from NASA MODIS satellite sensor data. Green shades indicate a positive trend of increasing growing season green cover, whereas brown shades indicate a negative trend of decreasing growing season green cover. Four forest sub-regions of interest are outlined in red, north to south as: Great Lakes, Southern Appalachian, Mid-Atlantic, and southeastern Coastal Plain.
Image credit: NASA
NASA scientists report that warmer temperatures and changes in precipitation locally and regionally have altered the growth of large forest areas in the eastern United States over the past 10 years. Using NASA’s Terra satellite, scientists examined the relationship between natural plant growth trends, as monitored by NASA satellite images, and variations in climate over the eastern United States from 2000 to 2010.

Monthly satellite images from the MODerate resolution Imaging Spectroradiometer (MODIS) Enhanced Vegetation Index (EVI) showed declining density of the green forest cover during summer in four sub-regions, the Upper Great Lakes, southern Appalachian, mid-Atlantic, and southeastern Coastal Plain. More than 20 percent of the non-agricultural area in the four sub-regions that showed decline during the growing season, were covered by forests. Nearly 40 percent of the forested area within the mid-Atlantic sub-region alone showed a significant decline in forest canopy cover. 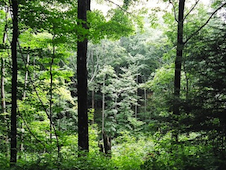 
“We looked next at the relationships between warmer temperatures, rainfall patterns, and reduced forest greenness across these regions,” said Christopher Potter, a research scientist at NASA’s Ames Research Center, Moffett Field, Calif. “This comprehensive data set gave us the evidence to conclude that a series of relatively dry years since 2000 has been unfavorable for vigorous growth of forest cover over much of the eastern U. S. this past decade.” Potter is the first author of the paper titled “Declining Vegetation Growth Rates in the Eastern United States from 2000 to 2010,” published by Natural Resources, Dec. 2012, (3), 184-190.

In the past, scientists were uncertain about what was causing the changes in the forests in the eastern U. S. Based on small-scale field site measurements since 1970, forest growth was thought to be increasing in regions where soil nutrients and water were in good supply. At the same time, there were fewer wildfires throughout the eastern U.S., which scientists believe contributed to the transformation of more open lands into closed-canopy forests with more shade-tolerant, fire-sensitive plants.

More recent studies indicate that climate change could be having many adverse and interrelated impacts on the region. The warming climate this century has caused new stresses on trees, such as insect pest outbreaks and the introduction of new pathogens. Scientists consider both climate change and disease to be dominant driving forces in the health of forests in this region.

NASA’s technology is revealing an entirely new picture of these complex impacts. The MODIS satellite captures very broad regional patterns of change in forests, wetlands, and grasslands by continuous monitoring of the natural plant cover over extended time periods. Now, with over a decade of “baseline” data to show how trees typically go through a yearly cycle of leaves blooming, summer growth, and leaves falling, scientists are detecting subtle deviations from the average cycle to provide early warning signs of change at the resolution of a few miles for the entire country.

"The next studies at NASA Ames will research areas that appear most affected by drought and warming to map out changes in forest growth at a resolution of several acres," said Potter.

This research was conducted under the National Climate Assessment as part of the United States Global Change Research Act of 1990.