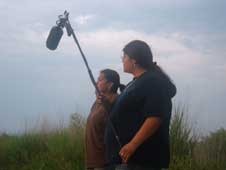 > View hi res image
Students from Haskell Indian Nations University in Lawrence, Kan., filmed a segment in August 2008 for the documentary "Where Words Touch the Earth." Credit: Stephen Graff Native Americans have a long tradition of preserving history and culture through oral storytelling, such as the tale of Crazy Horse, a war leader of the Oglala Lakota during the late 1800s. This word-of-mouth legend of Crazy Horse has inspired a project through which tribal college students are now relating a modern oral history -- about climate change.

The video series, "Where Words Touch the Earth," documents environmental changes observed by Native Americans. Each 12-15-minute episode is fully developed and produced by Native American students representing different ecosystems across the United States. NASA selected the schools and provided the funding, but it was the students who retained complete creative control of the production and its content.

"I wanted them to tell their stories -- that's the only way you're going to get a jewel," said David Adamec, a scientist at NASA's Goddard Space Flight Center in Greenbelt, Md., who had the vision for the project. 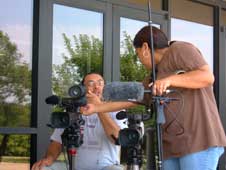 > View hi res image
Students from Haskell Indian Nations University in Lawrence, Kan., were responsible for all aspects of producing a segment for "Where Words Touch the Earth," from writing and directing to camera work and editing. Credit: Stephen Graff Adamec conceived of the project while visiting the Crazy Horse monument in South Dakota for a summer vacation in 2007. "Why not take advantage of the information contained in oral history and combine it with the climate resources we have at NASA?"

Now, students and elders from Haskell Indian Nations University in Lawrence, Kan., have produced a segment that explores the dramatic changes observed in the plains ecosystem. Producers from Northwest Indian College in Bellingham, Wash., portray how climate change has impacted salmon populations in the coastal ecosystem.

Tribal colleges in New Mexico, North Dakota and Wisconsin representing a desert, prairie and woodland environment, are now beginning to film. The final product aims to weave together all the perspectives and achieve a cohesive story of the Native American perspective on climate change.

Already, the student films are reaching and educating students across the United States. In fall 2008, public television production house WGBH Boston started working closely with the Bureau of Indian Education providing digital content and working with students and their teachers. "We started learning more about the intersection between traditional tribal communities and science education, and specifically around climate change," said Howard Lurie, Associate Director of Educational Productions for WGBH Boston.

On March 31, WGBH's Teachers' Domain launched the "Where Words Touch the Earth" collection, an online collection that disseminates repurposed versions of the documentaries so that they can be integrated into sixth- to 12th-grade classrooms. Teachers can download short clips, essays and discussion questions -- all linked to state standards.

"We think that it’s a unique way for elementary, middle and high school students to get deeper into the science," Lurie said.

The exchange goes both ways. "We might have assumed a disconnect between the traditional tribal community and hard science, but there's not," Lurie said. "Being connected to tradition doesn't mean you can't be a scientist."

Today, the educational dialogue continues, as students and instructors from Navajo Technical College in Crownpoint, N.M., visit Goddard to meet with Adamec and video specialists at Goddard, tour the center, and lay the groundwork for a new oral history.