Grow Text SizeShrink Text Size
Climate Models Project Increase in U.S. Wildfire Risk
Scientists using NASA satellite data and climate models have projected drier conditions likely will cause increased fire activity across the United States in coming decades. Other findings about U.S. wildfires, including their amount of carbon emissions and how the length and strength of fire seasons are expected to change under future climate conditions, were also presented Tuesday at the annual meeting of the American Geophysical Union in San Francisco. 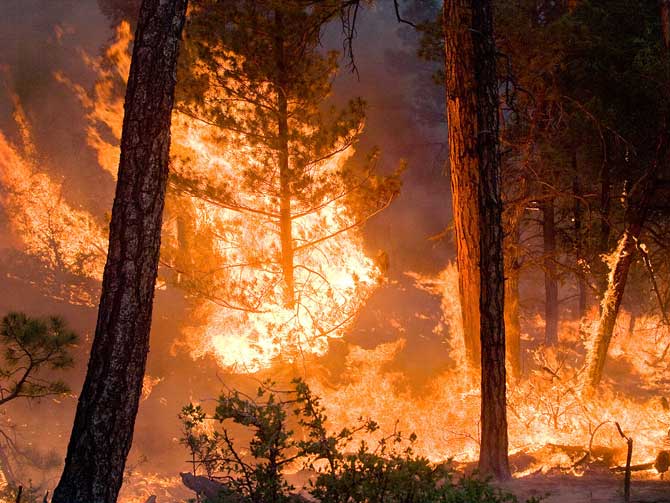 The Whitewater-Baldy Complex wildfire in Gila National Forest, New Mexico, as it burned on June 6th, 2012. Scientists calculate that high fire years like 2012 are likely occur two to four times per decade by mid-century, instead of once per decade under current climate conditions. Credit: Kari Greer/USFS Gila National Forest
› Larger image

"Climate models project an increase in fire risk across the U.S. by 2050, based on a trend toward drier conditions that favor fire activity and an increase in the frequency of extreme events," Morton said.

The analysis by Morton and colleagues used climate projections, prepared for the Fifth Assessment Report of the United Nations Intergovernmental Panel on Climate Change, to examine how dryness, and therefore fire activity, is expected to change.


The researchers calculated results for low and high greenhouse gas emissions scenarios. In both cases, results suggest more fire seasons that are longer and stronger across all regions of the U.S. in the next 30-50 years. Specifically, high fire years like 2012 would likely occur two to four times per decade by mid-century, instead of once per decade under current climate conditions. 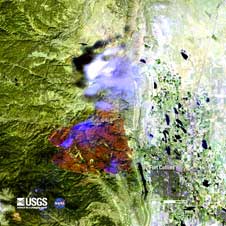 › Larger image
A Landsat 7 image of the 60,000 acres burned by the High Park wildfire just west of Fort Collins, CO as of June 18, 2012. The fire, which started on June 9 by a lightning strike, destroyed 189 homes as of June 19. In the June 18 image, clouds hover just north of the burned area, with smoke from the fire visible as blue. Credit: USGS/NASA

› Larger image
A visualization of cumulative fires from Jan. 1 through Oct. 31, 2012, detected by the MODIS instrument on board the Terra and Aqua satellites. Bright yellow shows areas that are more intense and have a larger area that is actively burning, flaming and/or smoldering. Credit: NASA Through August of this year, the U.S. burned area topped 2.5 million hectares (6.17 million acres), according to a fire emissions database that incorporates burned area estimates produced from observations by the Moderate Resolution Imaging Spectroradiometer instruments on NASA's Aqua and Terra satellites. That is short of the record 3.2 million hectares (7.90 million acres) burned in 2011, but exceeds the area burned during 12 of the 15 years since record keeping began in 1997. This and other satellite records, along with more refined climate and emissions models, are allowing scientists to tease out new information about fire trends.

"Fire is an inherently global phenomenon, and the only practical way to track large-scale patterns and changes in fire activity is with satellites," says Louis Giglio of the University of Maryland at College Park and Goddard.

As the U.S. land area burned by fire each year has increased significantly in the past 25 years, so too have the emissions. Carbon dioxide emissions from wildfires in the western U.S. have more than doubled since the 1980s, according to Chris Williams of Clark University in Worcester, Mass.

"With the climate change forecast for the region, this trend likely will continue as the western U.S. gets warmer and drier on average," Williams said. "If this comes to pass, we can anticipate increased fire severity and an even greater area burned annually, causing a further rise in the release of carbon dioxide."

Researchers expect a drier and more wildfire-prone U.S. in future decades. Previous research confirmed the connection between the measure of an environment's potential evaporation, or dryness, and fire activity.

From a fire and emissions management perspective, wildfires are not the entire U.S. fire story, according to research by Hsiao-Wen Lin of the University of California at Irvine. Satellite data show agricultural and prescribed fires are a significant factor and account for 70 percent of the total number of active fires in the continental U.S. Agricultural fires have increased 30 percent in the last decade.

In contrast with wildfires, agricultural and prescribed fires are less affected by climate, especially drought, during the fire season.

"That means there is greater potential to manage fire emissions, even in a future, drier climate with more wildfires. We need to use cost-benefit analysis to assess whether reductions in agricultural fire emissions -- which would benefit public health -- would significantly impact crop yields or other ecosystem services," Lin said.