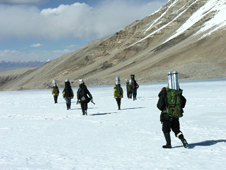 To better understand the role that black soot has on glaciers, researchers trekked high into the Himalayas to collect ice cores that contain a record of soot deposition that spans back to the 1950s. Credit: Institute of Tibetan Plateau Research, Chinese Academy of Sciences
› Larger image 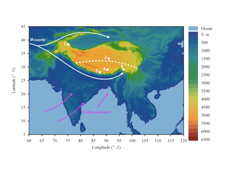 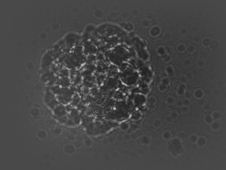 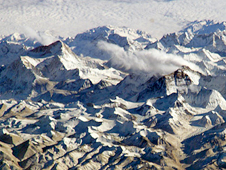 Himalayan glaciers, as seen in this image taken by an astronaut on the International Space Station, help replenish many of Asia’s most important rivers. Credit: NASA's Johnson Space Center
› Larger image Black soot deposited on Tibetan glaciers has contributed significantly to the retreat of the world’s largest non-polar ice masses, according to new research by scientists from NASA and the Chinese Academy of Sciences. Soot absorbs incoming solar radiation and can speed glacial melting when deposited on snow in sufficient quantities.

Temperatures on the Tibetan Plateau -- sometimes called Earth's "third pole" -- have warmed by 0.3°C (0.5°F) per decade over the past 30 years, about twice the rate of observed global temperature increases. New field research and ongoing quantitative modeling suggests that soot's warming influence on Tibetan glaciers could rival that of greenhouse gases.

"Tibet's glaciers are retreating at an alarming rate," said James Hansen, coauthor of the study and director of NASA’s Goddard Institute for Space Studies (GISS) in New York City. "Black soot is probably responsible for as much as half of the glacial melt, and greenhouse gases are responsible for the rest."

"During the last 20 years, the black soot concentration has increased two- to three-fold relative to its concentration in 1975," said Junji Cao, a researcher from the Chinese Academy of Sciences in Beijing and a coauthor of the paper.

The study was published December 7th in the Proceedings of the National Academy of Sciences.

"Fifty percent of the glaciers were retreating from 1950 to 1980 in the Tibetan region; that rose to 95 percent in the early 21st century," said Tandong Yao, director of the Chinese Academy's Institute of Tibetan Plateau Research. Some glaciers are retreating so quickly that they could disappear by mid-century if current trends continue, the researchers suggest.

Since melt water from Tibetan glaciers replenishes many of Asia’s major rivers -- including the Indus, Ganges, Yellow, and Brahmaputra -- such losses could have a profound impact on the billion people who rely on the rivers for fresh water. While rain and snow would still help replenish Asian rivers in the absence of glaciers, the change could hamper efforts to manage seasonal water resources by altering when fresh water supplies are available in areas already prone to water shortages.

Researchers led by Baiqing Xu of the Chinese Academy drilled and analyzed five ice cores from various locations across the Tibetan Plateau, looking for black carbon (a key component of soot) as well as organic carbon. The cores support the hypothesis that black soot amounts in the Himalayan glaciers correlate with black carbon emissions in Europe and South Asia.

At Zuoqiupu glacier -- a bellwether site on the southern edge of the plateau and downwind from the Indian subcontinent -- black soot deposition increased by 30 percent between 1990 and 2003. The rise in soot levels at Zuoqiupu follows a dip that followed the enacting of clean air regulations in Europe in the 1970s.

To refine the emerging understanding of soot's impact on glaciers, scientists are striving to gather ever more robust measurements. "We can’t expect this study to clarify the effect of black soot on the melting of Tibetan snow and glaciers entirely," said Cao. "Additional work that looks at albedo measurements, melting rate, and other types of reconnaissance is also needed."

For example, scientists are using satellite instruments such as the Moderate Resolution Imaging Spectroradiometer (MODIS) aboard the NASA satellites Terra and Aqua to enhance understanding of the region's albedo. And a new NASA climate satellite called Glory, which will launch late in 2010, will carry a new type of aerosol sensor that should be able to distinguish between aerosol types more accurately than previous instruments.

"Reduced black soot emissions, in addition to reduced greenhouse gases, may be required to avoid demise of Himalayan glaciers and retain the benefits of glaciers for seasonal fresh water supplies," Hansen said.

Aerosols May Drive a Significant Portion of Arctic Warming
http://www.nasa.gov/topics/earth/features/warming_aerosols.html