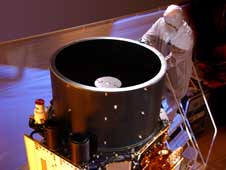 The backup laser’s “first light” shot from March 12 reveals the vertical cross-section of clouds and aerosols that CALIPSO is capable of capturing, compared to the birds-eye view offered by other instruments.
Credit: NASA. 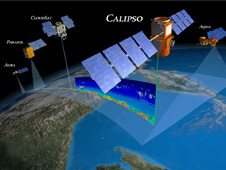 The Cloud-Aerosol Lidar and Infrared Pathfinder Satellite Observations (CALIPSO) satellite has resumed operations after switching from its primary to its backup laser nearly three years after the launch of a satellite that is helping scientists solve the puzzle of how clouds and aerosols affect Earth's climate.

The backup laser was designed into CALIPSO to make it robust, in case the primary laser became unreliable. The value of the planning came to the forefront early this year as the primary laser began to behave erratically, due to a slow pressure leak in the laser's canister. The leak was known about since prior to launch, and likely came about during fabrication. The CALIPSO team, a joint effort between NASA and Centre National d'Etudes Spatiales (CNES), worked together to start up the backup laser, which hadn't been used in three years. It provided its "first light" aerosol and cloud vertical profiles on Mar. 12. The instrument then resumed normal operations and is undergoing a calibration review now. The release of standard data products should resume in late April, and once data is re-processed the total gap due to the switch will be about 10 days.

CALIPSO provides a unique vertical profile measurement of clouds and aerosols using space-borne Light Detection and Ranging – or, lidar. Integrated with other measurements from a constellation of five satellites, one from France and four from NASA, called the A-Train, CALIPSO's observations are improving our understanding of two poorly understood variables in Earth's changing climate: aerosols and clouds and their interactions. CALIPSO's near-simultaneous measurements with the other instruments can be integrated with and also enhance data gathered by satellites such as CloudSat.

"This mission continues to be a success," said Chip Trepte, CALIPSO's project scientist, based at NASA's Langley Research Center. "We completed the objectives of the prime mission, which were to determine the location and frequency of clouds and aerosol layers over the globe and some of their properties, through at least three years. CALIPSO is filling a measurement gap that other satellite missions are unable to provide."

After an April 2006 launch, CALIPSO's primary laser began operating in June 2006, soon demonstrating the ability to observe and track clouds and aerosols as they change over time. The primary laser collected nearly three years, i.e., 12 seasons, of data. The backup laser appears to be healthy and able to last at least that long, barring unforeseen problems.

"Even though we are on each side of the Atlantic, we work as a single, integrated NASA-CNES team," said Nadège Quéruel, mission operations manager with the CNES team. CNES and NASA worked together to successfully manage the problems with the first laser and to transition to the second laser with only minor effect on the CALIPSO data record.

Trepte said the CALIPSO team was aware before launch that the laser canister was losing pressure. But the leak was so slow it was expected the primary laser could still complete much of the three-year, prime mission. "We were not surprised," Trepte said. "The good news is, we turned on the second laser that had been idle three years, and it's working. We built a redundant system to make sure we'd be able to continue making these important measurements."

The lidar instrument was built by Ball Aerospace & Technologies Corp. and the laser transmitters were manufactured by Fibertek Inc.

With humankind's burning of fossil fuels and other activities altering Earth's atmosphere and climate, scientists are using satellites such as CALIPSO to better understand the complexities of the atmosphere's structure and composition, its behavior and our impact on it as well as its impact on society. CALIPSO has expanded that quest by providing measurements to compare with models and thereby become an essential component of improving climate models.

CALIPSO provides a curtain of profile measurements along the satellite track and can measure aerosols and clouds during day and night. Aerosols are tiny suspended liquid or solid particles that appear to the human eye as dust, smoke and haze. Many natural sources produce aerosols: the oceans send sea salt into the air, winds kick up dust clouds, and wildfires create massive smoke and haze plumes. Industrial processes and agricultural burning by humans also create aerosols in large enough quantity to alter clouds, precipitation, the earth's energy budget and, ultimately, the climate. A NASA-led report released earlier this year said that our understanding of human-produced aerosols' climate change impacts remains inadequately understood, and scientists should seek to dramatically reduce the uncertainty of aerosol influence on climate change. Scientists around the world have also used CALIPSO data to learn more about air quality and pollution, illuminating air quality conditions such as the summer smog that blankets the Tibetan Plateau.

"We're seeing rivers of aerosols and dust coming and going," Trepte said. "Not only are we making important aerosol measurements, we've been able to map very thin clouds that affect how sunlight is absorbed or reflected, on a global basis."

While nearly three years of measurements has been a great start, the backup laser allows the mission to continue and build on a record that becomes more helpful the longer it gets. "It's one thing to get the measurements. It's another to capture the variability," Trepte said.

CALIPSO's primary laser generated more than 1.6 billion laser pulses and more than 20 terabytes of data. CALIPSO observations have been used to characterize the large effects of smoke located over clouds in warming the atmosphere. Conventional satellite instruments are unable to measure aerosols located above clouds and their effects were only estimated before this. The mission's data have been used to test measurements of clouds from conventional satellite sensors and improve the accuracy of these data, which will lead to advances in weather forecasting and climate prediction. And CALIPSO observations have given us a greatly improved knowledge of polar stratospheric clouds – clouds which form high in the atmosphere over the poles during the winter and play a major role in the formation of the ozone hole over Antarctica.

"The performance of CALIPSO's lidar instrument is also a benchmark in and of itself," Trepte said. "It's the first laser system that has operated in space this long, continuously, for atmospheric measurements."