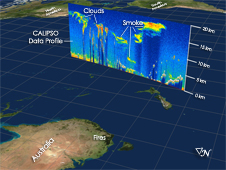 As CALIPSO passed over the smoke plumes accumulating over Australia on February 10, 2009, its lidar technology took a vertical "slice" of the atmosphere to see the distribution of clouds and aerosols. In this photo, the CALIPSO data reveals that the smoke reached an abnormal altitude of 20 km, a detail that planar images are not able to detect. Click on the image to view a higher resolution version. Credit: Chieko Kittaka, NASA's Langley Research Center.

In this photo, taken by the Moderate Resolution Imaging Spectroradiometer (MODIS), smoke from the fires in Australia is seen traveling across the Pacific Ocean toward New Zealand. As it mixes with the clouds, the smoke is distinguished by its tan color. Click on the image to view a higher resolution version. Credit: MODIS Rapid Response Team, NASA Goddard Space Flight Center. 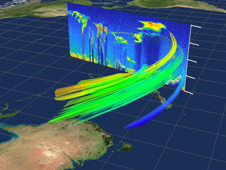 This visualization, which joins a single CALIPSO data profile with a back-trajectory, portrays the estimated movement of smoke over an 80-hour period. The varying colors of the trajectory represent the altitude of the traveling smoke, with blue depicting 5 km of height, and red representing 20 km. Click on the image to view a higher resolution version of the animation. Credit: Analysis by Chieko Kittaka; visualization by Kurt Severance. As smoke plumes from powerful bushfires clouded the Australian skies in early February, satellites orbiting the Earth captured the rapid dispersal of smoke in real-time. One particular satellite, however, saw the occurrence from a different perspective than the rest and uncovered a rare phenomenon.

The NASA Cloud-Aerosol Lidar and Infrared Pathfinder Satellite Observation (CALIPSO), using its active lidar system, traced vertically through the layers of the atmosphere to find that the Australian bushfire smoke was lofting, or rising, to an astonishing 12 miles, an unusually high altitude that penetrates the lower part of the stratosphere.

"Typically, the altitude of the smoke from wildfires is emitted to the lower troposphere, and occasionally, the smoke can get as high as tropopause heights," explains Chieko Kittaka, a research scientist at NASA Langley Research Center in Hampton, Va., who is working on analyzing the satellite data.

CALIPSO has the ability to see the vertical distribution of smoke particles in the atmosphere. While most other satellites saw the smoke as a flat image that portrayed the horizontal direction of the distribution, CALIPSO was able to see the altitude of the lofting smoke. The satellite is not only unique for its ability to make vertical measurements of the atmosphere, but it can also see aerosol layers and plumes that are often invisible to most other instruments. At first glance, another satellite may have thought that the smoke was a low-level cloud, but CALIPSO is able to look deeper.

"For the most part, smoke particles are smaller than cloud particles, and they have a shape that differs from ice crystals and water droplets. CALIPSO recognizes this and is able to distinguish smoke from clouds," explains Mike Fromm, a researcher from the U.S. Naval Research Laboratory in Washington, who has been investigating these fires with CALIPSO scientists at NASA Langley.

Determining where smoke layers are found and their location is important to better understand how tiny ash particles can possibly effect climate. "If smoke particles reach the upper troposphere or lower stratosphere, they can persist for weeks and travel long distances," explains Chip Trepte, the project scientist for CALIPSO. And at these altitudes they can also influence the formation and lifetime of clouds as well as their brightness. All of these effects can alter the way sunlight is reflected and absorbed in the atmosphere.

Because so many different aspects of the atmosphere are affected by the smoke particles, it is important to understand what caused their abnormal presence in the stratosphere. Fromm explains that as the heat from the fire rises, a convective weather system is created. Within this, a severe thunderstorm, known as the pyrocumulonimbus (pyroCb), develops. As the fire increases in strength, it acts like a chimney as it sucks the smoke from the flames up into the convective column. The smoke is then injected into the atmosphere at abnormally high altitudes – a side effect similar to volcanic eruptions. The abundant smoke fuels the storm's updrafts by serving as the nuclei for cloud particles, seeding so many that little-to-no precipitation forms, and taking away a storm-killing drag force.

While the elements of the fires in Australia are becoming clearer, there is still quite a bit of uncertainty surrounding the pyro-convection process. Satellite missions like CALIPSO have been supporting field campaigns to get a better handle on the meteorological, chemical, physical anomalies that forest fires create. This support in turn helps scientists learn more about other pyroCbs that have occurred.

"PyroCbs, such as the ones in Victoria, are historically rare," explains Fromm, who has been studying pyroconvection for over a decade. "Preliminary data from CALIPSO show that the smoke from these storms has gotten to altitudes never observed before."