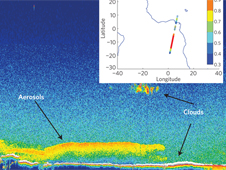 A vertical profile provided by the Cloud Aerosol Lidar and Infrared Pathfinder Satellite Observations (CALIPSO) mission reveals a thick plume of haze from fires (labeled here as aerosols) over a thinner layer of clouds. This image was captured over the southeast Atlantic Ocean, off of southern Africa, during the time period studied. Researchers found that the warming effect from aerosols increased substantially with a certain fraction of underlying clouds — a fraction they were able to pinpoint.
Click on the image to view full size.
Credit:University of Washington and NASA Langley Research Center.


The burning of trees and plants in the savannas of southern Africa creates massive aerosol plumes that drift high above the land mass. The aerosols – tiny suspended particles created by the fires – present an unruly variable for climate science. Some aerosols reflect incoming solar radiation and create cooling; some trap heat and warm the atmosphere. A lack of high accuracy data has restricted scientists' ability to better quantify how much aerosols contribute to global warming or cooling.

New research, using measurements from one of NASA's fifteen operating research satellites, shows that the warming effect of aerosols increases with the amount of cloud cover below the aerosols, according to a paper published recently in Nature Geoscience by a team of scientists from the United States and India. In fact, the relationship between aerosol warming/cooling and strength of cloud cover was found to be nearly linear, making it possible for researchers to define the critical amount of cloud cover at which aerosols switch from producing a cooling to a warming effect. That newfound capability could improve long-term projections of global climate models that pull together many processes about the changing planet. Incorporating new understanding of the atmosphere, such as the relationship between clouds and aerosols, will improve climate projections that policymakers use to design the best responses to global climate change.

Using the vertical profiles of cloud and aerosol layers produced by NASA's Cloud Aerosol Lidar and Infrared Pathfinder Satellite Observation (CALIPSO) mission, the researchers, led by Duli Chand, looked at a region of the southeastern Atlantic Ocean during July-October of 2006 and 2007. This region was chosen because climate models often disagree about the net effect of aerosols produced by frequent fires in southern Africa. They found that smoke from fires create more warming in the atmosphere when there is a layer of clouds underneath the aerosols. The estimated amount of warming can increase by three times when the vertical patterns of clouds and aerosols are taken into account.

"What motivated us was we knew this was an area where the global models disagree strongly," said Rob Wood, a professor of atmospheric sciences at the University of Washington. "We knew CALIPSO could see these aerosols above these clouds in ways other instruments couldn't." As Woods' findings showed, that ability to see multiple layers of the atmosphere led directly to more accurate measurements.

"Their result is fairly significant," Winker said. "It showed something we've thought about for quite awhile but have been unable to quantify. It's an example of the kind of unique contribution that CALIPSO can make to our understanding of climate change."

Winker said climate change models could benefit from this kind of information. He and others are working on creating data sets that could be used to improve the aerosol-cloud relationship in these models.

"We're working toward data sets that could do that. By the time we have those data sets ready, the general circulation models will probably be able to use them," Winker said.

Wood said he was surprised to find such a strong relationship between cloud cover and aerosols' impact on warming or cooling. He said defining the switching point between warming and cooling seemed particularly sensitive to the single-scattering albedo – which determines how, for instance, a dust or soot particle scatters or absorbs radiation -- of aerosols.

Wood said he and others who worked on the paper are interested in trying to incorporate their findings into large-scale climate models. "Ideally, we'd like to get some collaboration going and look at the models and look at our data," he said.