California Wildfires Continue to Burn Out of Control 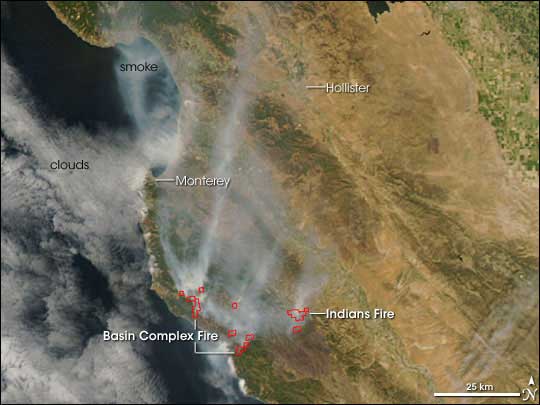 Numerous wildfires continue to burn out of control throughout California. Many of these fires were ignited in late June by dry lighting and made worse by parched conditions and a lack of rainfall, fire officials report.

NASA’s Aqua satellite captured this image of several of the blazes as it passed over California on June 30, 2008. This image specifically shows the fires burning in the area south of Monterey, some of the state’s largest according to fire officials. Active fires are outlined in red. Smoke can also be seen billowing north up the California coastline.

According to news reports, about 364,600 acres, or almost 570 square miles, of land throughout the state have already burned, and most of the blazes have not yet been contained.

> For more on the story, or to download high resolution images click this link. Laura Spector Motel
NASA's Goddard Space Flight Center
› Back To Top