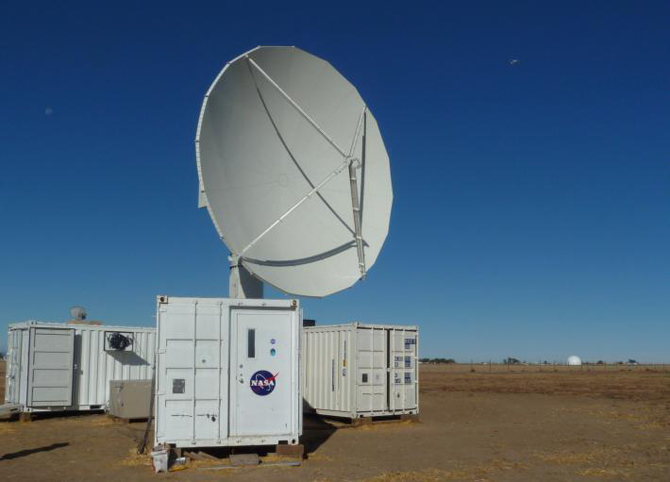 › View larger
The NASA NPOL radar is a research grade S-band, scanning dual-polarimetric radar. It underwent a complete antenna system upgrade in 2010 and is one of two fully transportable research-grade S-band systems in the world. It is used to make accurate volumetric measurements of precipitation including rainfall rate, particle size distributions, water contents and precipitation type. Credit: NASA

At sunset on a spring night, tree-dwelling songbirds take off in a flurry of wings from the lower Delmarva Peninsula near Oyster, Va. The peninsula is a temporary home to hundreds of species of migratory birds. In spring they fly north to boreal forests of New England and Canada, returning from places as far south as Central and South America. Scientists are hoping to learn where the prime stopover spots are on this route with the help of ground radar set up by NASA to improve satellite measurements of rainfall.

Weather radar detects raindrops in the air, says Jeff Buler, radar ornithologist at University of Delaware, "and it essentially sees birds as sort of big bags of water."

The Nature Conservancy signed a Space Act Agreement that will provide a location in the Virginia Coast Reserve to support NASA’s Precipitation Science programs, in particular the international Global Precipitation Measurement (GPM) mission, led by NASA and the Japan Space Exploration Agency, that will provide the next generation of global space-based observations of rain and snow. GPM will gather data from an international network of satellites led by the GPM Core observatory that is scheduled for launch in 2014.

NASA is stationing approximately 50 rain gauges in an area of approximately 10 square miles near Oyster. This dense network of gauges will serve as a reference for validating rain estimates made using the advanced capabilities of the NASA Polarimetric (NPOL) weather radar. The NPOL can quickly scan rainfall near and above the surface while providing accurate information on how hard it is falling over a very large area. 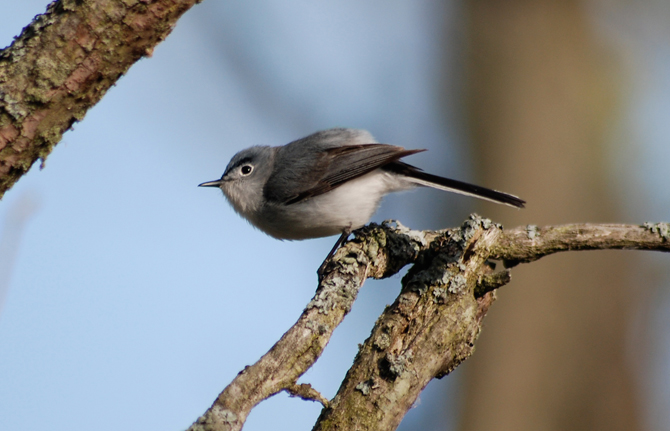 That same radar is what ecologists are hoping can help them understand where birds are stopping as they migrate through the Eastern Shore and aid conservation efforts, says Barry Truitt, a scientist with The Nature Conservancy.

The Conservancy is collaborating with Eric Walters of Old Dominion University and Jeff Buler of the University of Delaware who will have access to the NPOL radar and its data stream, on request and a non-interference basis, for migratory bird studies on the southern end of the Delmarva Peninsula. 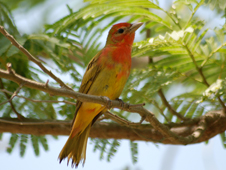 › View larger
The Summer Tanager winters in Central and South America. Males are entirely red and females (shown here) are primarily a dull yellow. They eat bees and wasps. Credit: Kyle Horton "Radar gives us a way to map their distributions over large spatial scales because essentially these radars detect the birds as they take off," says Buler. He maps bird stopover sites with weather radars operated by the National Weather Service. "You just get this explosion of birds flying up into the radar and it basically gives us a snapshot of where they occur on the ground."

The NPOL radar detects falling rain at lower altitudes and is sensitive enough to distinguish the size and shapes of raindrops, so it will be able to distinguish between flocks of birds and swarms of insects. The NPOL will also be situated in a blindspot of the weather radar network, expanding coverage of bird migration stopover areas. Buler expects they will begin collecting radar data next fall as warblers, thrushes, tanagers, flycatchers and dozens of other songbirds begin their journey south.

Eric Walters, an avian conservation biologist at Old Dominion University will do the bird migration project's own ground validation. Once the radar has identified bird stopover points, he and his students will hike into the area to survey what kinds of habitats they are and to see what bird species are visiting.