Grow Text SizeShrink Text Size
NASA Satellites Reveal Surprising Connection Between Beetle Attacks, Wildfire
If your summer travels have taken you across the Rocky Mountains, you've probably seen large swaths of reddish trees dotting otherwise green forests. While it may look like autumn has come early to the mountains, evergreen trees don't change color with the seasons. The red trees are dying, the result of attacks by mountain pine beetles.

Mountain pine beetles are native to western forests, and they have evolved with the trees they infest, such as lodgepole pine and whitebark pine trees. However, in the last decade, warmer temperatures have caused pine beetle numbers to skyrocket. Huge areas of red, dying forest now span from British Columbia through Colorado, and there's no sign the outbreak is slowing in many areas.

The affected regions are so large that NASA satellites, such as Landsat, can even detect areas of beetle-killed forest from space. Today, NASA has released a new video about how scientists can use Landsat satellite imagery to map these pine beetle outbreaks, and what impact the beetle damage might have on forest fire.


As the dog days of summer hit full force, some say the pine beetles have transformed healthy forest into a dry tinderbox primed for wildfire.

For Yellowstone National Park Vegetation Management Specialist Roy Renkin, those worries are nothing new. "I've heard [the tinderbox analogy] ever since I started my professional career in the forestry and fire management business 32 years ago," he said. "But having the opportunity to observe such interaction over the years in regards to the Yellowstone natural fire program, I must admit that observations never quite met with the expectation." 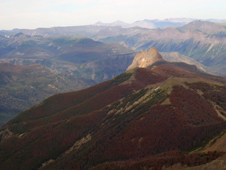 Mountain pine beetles have killed large areas of forests in the West, such as these dead and dying trees flanking Avalanche Peak on the border between Yellowstone National Park and the Shoshone National Forest in Wyoming. Credit: Roy Renkin, National Park Service › Larger image 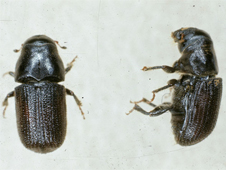 First, the researchers used Landsat data to create maps of areas hardest hit by the recent beetle outbreak. The Landsat satellites capture imagery not just in the visible spectrum, but also in wavelengths invisible to the human eye. One such wavelength band combination includes the near infrared, a part of the spectrum in which healthy plants reflect a great deal of energy. By scanning the Landsat near infrared imagery, the team located areas of probable beetle damage.

Next, they hiked into the areas to confirm that the majority of the affected trees were indeed killed by beetles rather than by other causes. Mountain pine beetles leave telltale signs of their presence, including "pitch tubes" -- areas of hardened resin where trees attempt to defend themselves from the boring insects by flowing sticky pitch from the wounds. By scanning the trees for pitch tubes and looking for beetle "galleries" under the bark where the adult insect lays its eggs, the team was able to confirm that they were reading the satellite imagery correctly.

Finally, the University of Wisconsin team compares maps of beetle-killed forest with maps of recent fires.

"Of course, we can't go out and actually set a fire in beetle damaged areas where we've got red, green or no needles," Townsend said. We just can't do that, so we collect data on the ground, we collect data from satellites, and then we build models of how much fuel is there and how burnable it is."

Their preliminary analysis indicates that large fires do not appear to occur more often or with greater severity in forest tracts with beetle damage. In fact, in some cases, beetle-killed forest swaths may actually be less likely to burn. What they're discovering is in line with previous research on the subject.

The results may seem at first counterintuitive, but make sense when considered more carefully. First, while green needles on trees appear to be more lush and harder to burn, they contain high levels very flammable volatile oils. When the needles die, those flammable oils begin to break down. As a result, depending on the weather conditions, dead needles may not be more likely to catch and sustain a fire than live needles.

Second, when beetles kill a lodgepole pine tree, the needles begin to fall off and decompose on the forest floor relatively quickly. In a sense, the beetles are thinning the forest, and the naked trees left behind are essentially akin to large fire logs. However, just as you can't start a fire in a fireplace with just large logs and no kindling, wildfires are less likely to ignite and carry in a forest of dead tree trunks and low needle litter.

Forest ecologists noted this same phenomenon after the massive Yellowstone wildfires in 1988. As large crown fires swept quickly through the forest, many trees were killed and their needles burned off, but the standing dead tree trunks remained. In the ensuing years, new wildfires have tended to slow and sometimes even burn out when they reach standing dead forest. There simply aren't enough small fuels to propel the fire.

For Townsend, the results are a further reminder that, in complex ecosystems like that in and around Yellowstone, things aren't always as they appear at first blush.

"I think it's important for people not to assume that there are relationships for certain types of features on the landscape," he says. "It's easy to think, 'It's more damaged so more likely to burn.' That's why it's important to ask questions and not take everything as gospel truth, but go out and see if what we think is happening in our mind is really happening on the ground."

While pine beetle attacks may not, in fact, increase fire risk in western forests, Townsend believes fire and beetles do share a connection -- climate change.

Cold winter nights have traditionally kept beetle numbers in check by killing off larvae as they overwinter in trees. In the last decade, winter nighttime temperatures have not dipped as low -- an observation predicted by climate change models. More beetles are surviving to damage larger areas of forest.

Fires, of course, are also affected by warmer temperatures. As temperatures warm and some areas become drier, many climate scientists predict fires to increase in number and size.

Both hold the potential to significantly change Rocky mountain forests, but, as Townsend noted, both are also key to forest health.

"Both fire and beetle damage are natural parts of system and have been since forests developed," Townsend said. "What we have right now is a widespread attack that we haven't seen before, but it is a natural part of the system."

Renkin agrees with the assessment. "Disturbances like insect outbreaks and fire are recognized to be integral to the health of the forests," he said, "and it has taken ecologists most of this century to realize as much. Yet when these disturbances occur, our emotional psyche leads us to say the forests are 'unhealthy.' Bugs and fires are neither good nor bad, they just are."

The Rocky Mountain West has experienced relatively few large fires this year, but the fire season isn't over yet. The end of the current pine beetle outbreak is likely even further away.

As a result, future summer travelers are likely to see more of these two Rocky mountain natives -- mountain pine beetles and fire.

Landsat is a joint program of NASA and the U.S. Geological Survey. Jennifer Shoemaker
NASA's Goddard Space Flight Center
› Back To Top