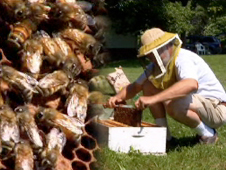 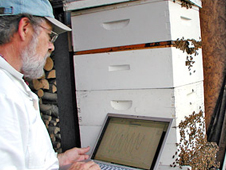 > View larger image
Wayne Esaias, a NASA scientist, records the weight data of one of his beehives. Esaias is investigating beehives' seasonal cycle of weight gain and loss and relating that to satellite data showing vegetation change to better understand the impact of climate change on pollinators and the flowering plants they frequent. Credit: Elaine Esaias 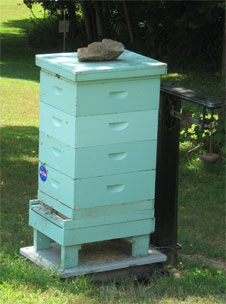 > View larger image
A beehive in West Friendship, Md., sits atop a scale. Once a day, the hive's owner, a backyard beekeeper, measures the hive's weight, which increases significantly during nectar flows in the spring. Credit: Brent Parks 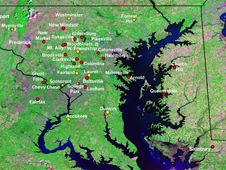 > View larger image
The size of HoneyBeeNet, which relies almost entirely on small-scale backyard beekeepers, has doubled over the last year and now includes more than 87 data collection sites. The dots here indicate HoneyBeeNet locations in Maryland and Virginia. Sites established since 2008 are yellow; those established between 1983 and 2008 are red, and those established before 1983 are blue. Credit: NASA Estimates are that there are somewhere between six and ten million species of insects on the planet, yet few are as charismatic as the honey bee.

Part of an order of winged insects called Hymenoptera, honey bees are best known for being prodigious producers of honey, the sweet amber substance they produce by partially digesting and repeatedly regurgitating the sugar-rich nectar found within the petals of flowering plants. They're also the workhorses of the modern industrial agricultural system, relied upon to pollinate crops ranging from almonds to watermelons to peaches. And they're even noted dancers capable of performing an array of complex "waggle" dances to communicate.

And now -- thanks to an innovative project conceived by Wayne Esaias, a veteran oceanographer at NASA's Goddard Space Flight Center in Greenbelt, Md. -- bees have yet another role: that of climate data collectors.

When honey bees search for honey, colony scouts tend to scour far and wide and sample the area around a hive remarkably evenly, regardless of the size of the hive. And that, Esaias explained, means they excel in keeping tabs on the dynamics of flowering ecosystems in ways that even a small army of graduate students can not.

The key piece of data bees collect relates to the nectar flow, which in the mid-Atlantic region tends to come in a burst in the spring. Major nectar flows, typically caused by blooms of tulip-poplar and black locust trees, leave an unmistakable fingerprint on beehives -- a rapid increase in hive weight sometimes exceeding 20 pounds per day. When a nectar flow finishes, the opposite is true: hives start to lose weight, sometimes by as much as a pound a day.

By creating a burgeoning network of citizen scientists who use industrial-sized scales to weigh their hives each day -- HoneyBeeNet -- Esaias aims to quantify the dynamics of nectar flow over time. Participating beekeepers send their data to Esaias who analyzes it, and posts nectar flow trend graphs and other environmental data for each collection site on HoneyBeeNet's webpage.

The size of HoneyBeeNet, which relies almost entirely on small-scale backyard beekeepers, has doubled over the last year and now includes more than 87 data collection sites. While the majority of sites are in Maryland, HoneyBeeNet now has sites in more than 20 states.

Data from the network, when combined with additional data that reach back to the 1920’s, indicate that the timing of spring nectar flows have undergone extraordinary changes. "Each year, the nectar flow comes about a half-day earlier on average," said Esaias. "In total, since the 1970s, it has moved forward by about month in Maryland."

Esaias and Goddard colleague Robert Wolfe recently compared nectar flow data from HoneyBeeNet to satellite data that measures the annual "green up" of vegetation in the spring, one of the first times that scientists have attempted such a comparison. They corresponded nearly perfectly, confirming the usefulness of the citizen-science derived data from HoneyBeeNet to address changes in nectar flows.

What's to blame for the remarkable warming trend in Maryland? Washington's growth has certainly played a role. Urban areas, explained Esaias, produce a "heat island" effect that causes temperatures in surrounding areas to creep upward. But, in addition to that, Esaias suspects that climate change is also contributing.

And that has him nervous. "A month is a long time. If this keeps up, and the nectar flows continue to come earlier and earlier, there's a risk that pollinators could end up out of sync with the plant species that they've pollinated historically," Esaias said.

He's not the only researcher who's looking at this issue. The National Academies of Science published a landmark report in 2007 that highlighted the precarious status of pollinators in North America.

Many pollinators -- ranging from honey bees, to bumble bees, to lesser known species seem to be in the midst of protracted population declines. Managed honey bee colonies, for example, have seen their numbers fall from about 5.9 million in 1947 to just 2.4 million in 2005.

In most cases, it isn't clear what's causing the population declines or whether climate change is exacerbating the problem, though many researchers suspect that new types of viruses, mites and other parasites and pesticides are important factors.

"But it's not just the honey bees that we need to be looking at," said May Berenbaum, an ecologist at the University of Illinois at Urbana-Champaign and the lead author on the National Academies report. "For honey bees, at least we can truck them around or feed them when there's a problem. It's the wild species of pollinators that are the greatest cause for concern."

Bumblebees, wasps, butterflies, and countless other insects -- as well as some bats and birds -- are the glue that keeps many wild ecosystems intact through pollination. And scientists are only beginning to comprehend the potential consequences that could unfold if the pollinators and the plants that rely on them get so far out of sync that extinctions begin to occur.

"To borrow an old analogy that Paul Ehrlich often used, with the wild pollinators, losing a species is a bit like losing screws in a plane" said Berenbaum. "If you lose a few here or there, it's not the end of the world, and your plane can still fly. But if you lose too many, at some point, the whole plane can suddenly come apart in mid-flight."

Indeed, entomologists have hardly begun the task of identifying wild pollinators, not to mention determining definitely which species are threatened or how they might respond as the climate shifts. Esais' research offers hints about how bees might respond to climate change. Still, scientists estimate that there are more than 30,000 different bee species alone, and only about half of them have been formally described.

Though just a proverbial drop in the honey bucket, HoneyBeeNet is one way that citizens can help scientists better understand how climate change is affecting one species of pollinator. Alice Parks, a backyard beekeeper from West Friendship, Md., has participated for two years. She bought a used scale for just $26 at an auction, and weighs her hive every night.

“Weighing can be a chore sometimes,” she said. “But it’s such an incredibly rewarding project that it’s worth it. I’m learning so much about my bees that's making me a better beekeeper, but I’m also contributing to a larger project that’s helping scientists address environmental problems on a global scale.”