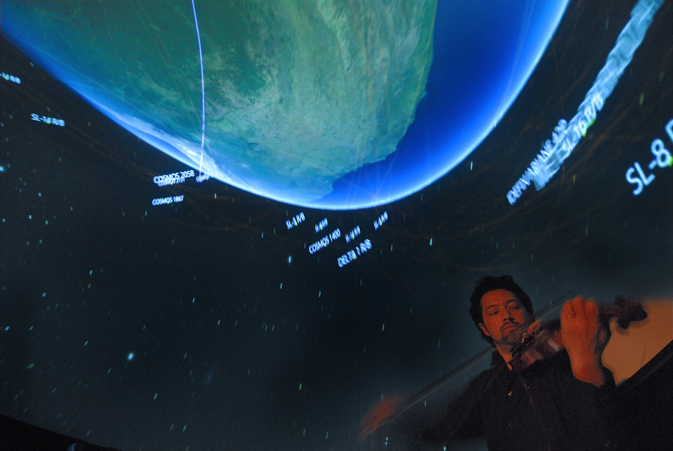 Composer and violinist Kenji Williams performs in the Beautiful Earth program. His combination of music with NASA visuals and images of Earth from space simulates the emotions astronauts experience as they look back at Earth. (Credit: NASA)
› Larger image
Beautiful Earth combines Williams's Bella Gaia show with interactive talks by scientists and American Indian educators, and hands-on workshops for students. Williams's performance of Bella Gaia (which translates to "Beautiful Earth)" provides an emotional element to the science education program.

"I would love for people to feel a real and personal connection with the science of the living Earth," Williams said. "Without this emotional connection, stewardship of our resources will be difficult to develop in any long-lasting way. A 'culture of ecology’ is what is needed to create pervasive change, and this is what I would like audiences to feel with their minds and hearts."

NASA's Beautiful Earth showcases Earth's systems and highlights many NASA missions studying Earth. The show on April 19 focused on the water cycle and featured video of American Indians from the Ottawa and Chippewa tribes undertaking a "water walk," a sacred ceremony that celebrates the connections between water and life. The production also included imagery of forest fires in the Amazon and time-lapses of Arctic ice.

Williams created Bella Gaia to inspire people and give them a glimpse into the rare vantage point that astronauts have when they are in space.

"I was inspired by a meeting and conversation with NASA astronaut Mike Fincke several years ago," Williams said. "He told me of his profound transformation the first time he saw the Earth from space, from the International Space Station. I was so inspired by his story that it got me thinking, 'How could I bring this transformative experienced that astronauts commonly have, to those of us who can't go to space?'"

This "transformative experience," which author Frank White called the Overview Effect, represents a change in how some returning astronauts conceptualize Earth, one that overshadows manmade boundaries by a sudden awareness that Earth operates as a borderless, interconnected whole.

"The innovative aspect of this project is that it combines three different and fundamental ways to raise interest and convey knowledge: Emotional, intellectual, and hands-on," Markus said. "After interest in our Earth and the imagery is awakened through the music show, the student will learn about the science behind those images. The hands-on workshop will teach a real understanding of some the fundamental climate processes."

In the workshops, students performed experiments using colorized fresh and salt water of different temperatures as well as ice cubes, to demonstrate water density relative to the Earth’s water circulation system. These experiments help students grasp concepts learned in the live show and in the scientists' talks.

"People are surprised to see the Earth in a new way," said Valerie Casasanto, an education specialist from the University of Maryland, Baltimore County, stationed at Goddard and the principal investigator for Beautiful Earth. The program is funded by a NASA Education Grant from the Science Mission Directorate: Opportunities in Education and Public Outreach for Earth and Space Science. Casasanto says that one of the goals of the program is to inspire all students, particularly those who may not be interested in math and science. The program also seeks to reach out to underserved communities.

"Children do not always know how beautiful the Earth is until they see it from a new perspective, as the astronauts see it, as one interconnected whole," Casasanto said. "People have been touched by the program. We hope this will lead to action to take better stewardship of our home planet."

On April 18, a version of the performance was broadcast live to schools across the country through NASA's Digital Learning Network (DLN).

For more information about the Beautiful Earth program visit:

For more information about BellaGaia, visit: