Grow Text SizeShrink Text Size
What Will Climate Change and Sea Level Rise Mean for Barrier Islands?
A new survey of barrier islands published earlier this spring offers the most thorough assessment to date of the thousands of small islands that hug the coasts of the world's landmasses. The study, led by Matthew Stutz of Meredith College, Raleigh, N.C., and Orrin Pilkey of Duke University, Durham, N.C., offers new insight into how the islands form and evolve over time – and how they may fare as the climate changes and sea level rises.

The survey is based on a global collection of satellite images from Landsat 7 as well as information from topographic and navigational charts. The satellite images were captured in 2000, and processed by a private company as part of an effort funded by NASA and the U.S. Geological Survey.

Stutz, the study's lead author, highlighted a series of key findings from the new survey during an interview with a NASA science writer. 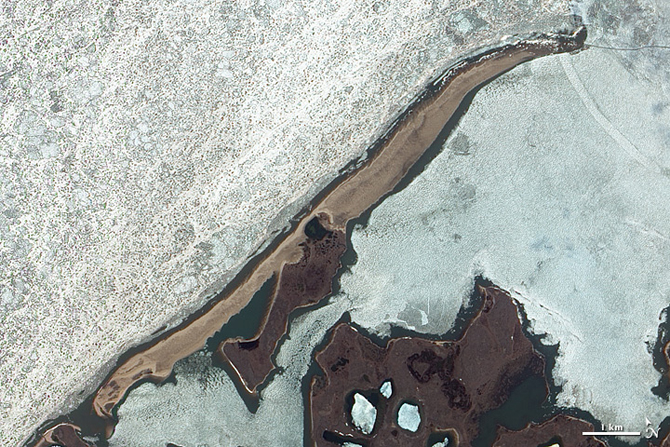 Every barrier island is unique.

Every island chain has a complex set of forces acting on it that underpin how islands form and how they're likely to change over time. Barrier islands often develop in the mouths of flooded river valleys as sea level rises, but they can also form at the end of rivers as sediment builds up and creates a delta. Other important factors in barrier island formation include regional tectonics, sea level changes, climate, vegetation and wave activity. "Understanding how such forces impact barrier islands is the key to understanding how climate change will affect our coastlines," noted Stutz.

Scientists estimate that the rate of sea level rise will likely double or triple in the next hundred years due to climate change. Paradoxically, gradual sea level rise can generate new barrier islands. Rising seas create shallow bays that develop barrier islands in the mouths of the bays along certain types of coastline.

However, extremely rapid sea level rise -- especially when coupled with decreases in sediment supply -- can simply inundate islands causing them to break up and disappear. Islands are eroding rapidly along the Mississippi Delta, Eastern Canada and the Arctic for these reasons.

"However, rising sea level is not just like pouring more water into a bathtub," Stutz emphasized. Islands react differently based on the geology in a region and how the waves and tides in an area are affected. People tend to assume sea level rise means fewer islands no matter what, but the rate of rise is critical." 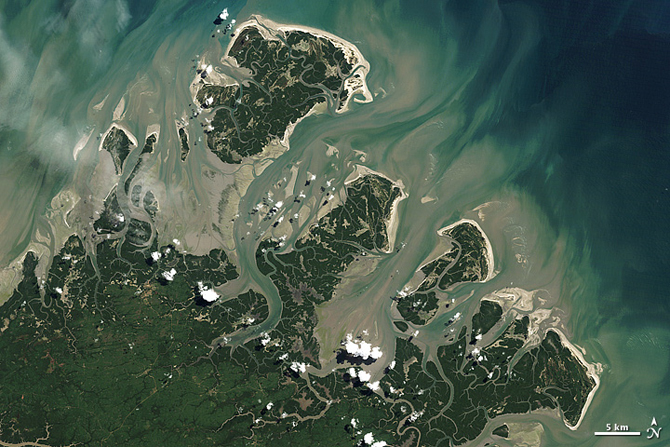 The Thematic Mapper on the Landsat 5 satellite captured this 2006 image of previously unrecognized barrier islands along the northeast coast of Brazil, midway between the mouth of the Amazon River and the coastal city of São Luís. Brazil has the world’s longest continuous chain of barrier islands—54 in total, extending more than 355 miles along the Atlantic coast. (Credit: NASA's Earth Observatory)
› Related story from NASA's Earth Observatory

There are far more barrier islands than previously thought.

A survey conducted by the same researchers tallied 1,492 barrier islands in 2001, but Stutz and Pilkey counted more than 2,149 this time. The difference: the researchers had access to higher-quality satellite imagery that covered a larger portion of the globe than they did last time. "It's not that 657 islands appeared overnight. We simply did a more thorough job of counting what was already out there," said Stutz. The researchers counted extensive island chains in Brazil, Madagascar and Australia that the previous survey had left out.

Stable coasts, such as the eastern coast of the United States, tend to have wide, low relief areas with shallow estuaries that are conducive to barrier island formation. In contrast, continental margins near actively colliding plates, which generate earthquakes and volcanoes, produce fewer barrier islands. At active margins, such as the rocky cliffs along the Pacific, steep grades typically dominate coastal areas and prevent the formation of islands.

Storms tend to cause islands to retreat, carve new inlets that make them shorter and more numerous, and sometimes destroy them completely. The frequency of storms varies by latitude and climate. The Arctic and most temperate coasts experience regular storms, while more tropical areas experience few storms and more gentle swells most of the year, conditions that encourage the formation of sandy beaches. Major storms can cause drastic changes to barrier islands. After Hurricane Katrina, for example, many islands in the Mississippi River Delta were destroyed or radically changed.

Barriers islands in the Arctic make up nearly a quarter of the world's barrier islands, and they're more vulnerable to climate change than islands anywhere else in the world. The reason: melting of sea ice and the permafrost that buffers Arctic islands from waves have left them susceptible to constant pounding from storms. Recently measured erosion rates in the Beaufort Sea show Arctic barrier islands eroding three to four times faster than islands in the continental United States. Any further acceleration in erosion rates could result in the rapid breakup of many Arctic islands, Stutz's analysis noted.


More research is needed, especially on a local scale.

Coastal areas will likely experience major changes in sea levels this century due to climate change. The shifts, however, will be anything but uniform. NASA research shows that some coasts are experiencing sea level rise significantly faster than the global average of 3.27 millimeters (about 1/8 of an inch) per year, while other areas are experiencing slower rates of rise and even falling sea levels. "It would be nice if we could say we can predict exactly how a given island or island chain will react to rising sea levels or some other environmental change, but we're simply not there yet for most islands, especially for many tropical islands where research dollars are scarce. We're still a long way from being able to accurately model how an individual island will change as a result of climate change or even simple development pressure," said Stutz.