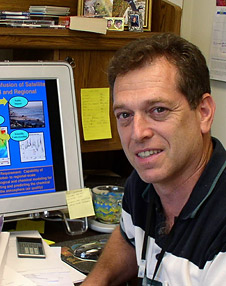 Ozone spikes are part of a pattern of increasing O3 levels globally, in even the most remote areas, says Dr. Jack Fishman, senior research scientist in the Science Directorate at NASA Langley Research Center in Hampton, Va.

"I think what we have to dispel is that ozone pollution is confined to places like Los Angeles and Houston," says Fishman. "Despite emission controls that have resulted in notable reductions in many American cities, O3 concentrations in non-urban areas in both the U.S. and around the world are increasing, with negative impacts to all living things -- plants, animals, and people."

Fishman is an expert in the composition of the troposphere, which is the part of the atmosphere that extends from the ground up to four to 12 miles (19.3 km), depending on where it is measured. In general, the troposphere is deeper in the tropics than at higher latitudes.

The troposphere contains about 75 percent of the atmosphere's mass, 99 percent of its water vapor and is where weather occurs.

Although 'good' ozone high in the stratosphere -- the layer just above the troposphere -- provides a shield to protect life on Earth, direct contact with it is harmful to plants and animals, including humans. 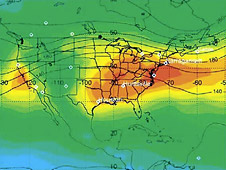 According to the Environmental Protection Agency, exposure to ozone levels of greater than 80 parts per billion for eight hours or longer is unhealthy. Harmful effects can include throat and lung irritation or aggravation of asthma or emphysema.

Ground-level 'bad' ozone forms when nitrogen oxide gases from vehicle and industrial emissions react with volatile organic compounds -- carbon-containing chemicals that evaporate easily into the air, such as gasoline and paint thinners.

Among the crops affected are soybeans, rice, alfalfa, barley, cotton, oat, peanut, potato and wheat. Research by Fishman and others suggests that globally, the cost of crop damage by surface ozone is as much as $26 billion annually.

And it's likely to get worse.

"Coupling our recently published crop productivity statistical findings with a global model that simulates the formation and transport of ozone pollution, our findings suggest that we are now at a crossroads with respect to agricultural productivity," the St. Louis native says.

Surface ozone, Fishman adds, knows no geographic or political boundaries. Indeed, he says, "the influx of pollution from east Asia might have been a factor that led to crossing a threshold concentration in the U.S. so that the impact of such pollution is now observable. In other words, if we had done the same analysis using agricultural and ozone data from the 1980s or even 1990s, the impact of ozone on crops would not have been seen."

"Certainly, in the 19th and early 20th century, background surface ozone concentrations were so low that an increase of 25 percent would not have affected living organisms," says Fishman. "But with the IPCC-projected increase on the order of 10 to 20 percent in the next decade or two, the currently observable effects on crop productivity will be significantly exacerbated."


How data are gathered 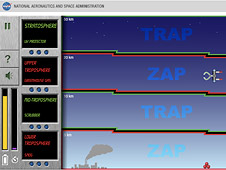 Ozone data have been collected from space by NASA's Total Ozone Mapping Spectrometer (TOMS) aboard several satellites that flew between 1978 and 2005 and now from the Ozone Monitoring Instrument (OMI) on the Aura satellite, launched in 2004.

At NASA's Langley Research Center in Hampton, Va., air-quality monitoring is performed onsite daily by Virginia's Department of Environmental Quality (DEQ) and the U.S. Environmental Protection Agency. The monitoring station opened this past spring under an agreement between NASA and the DEQ.

Measured are pollutants -- from factories, power plants and cars -- that can damage human health, plants, the environment and infrastructure. The pollutants include ozone, carbon monoxide, nitrogen oxides, sulfur oxides and airborne particulates.

The site "will bring together the partnership of NASA, DEQ, and the EPA in a coordinated effort to assess the relationship between space-based observations and surface observations of air quality," Langley scientist Margaret Pippin said last April. She is the scientist coordinating the DEQ's move to Langley.

The Langley site will house a complementary instrument that is essentially a ground-based version of the Ozone Monitoring Instrument. In parallel, both instruments will provide unique insight into how satellites can be used to improve our understanding of the formation of widespread air pollution episodes.

Ground-based air-quality measuring stations are located around the world. Although these provide valuable data, their coverage is limited. Satellites can provide a more global picture of air quality, but the quantities they measure from space are dependent on other factors in addition to the concentration measured at the surface. In addition to the DEQ/EPA/NASA venture, a Langley-led campaign will make trace gas and particulate measurements from instruments aboard NASA aircraft. The campaign is intended to improve the use of satellites for monitoring air quality, and to better understand the relationship between ground and satellite measurements.