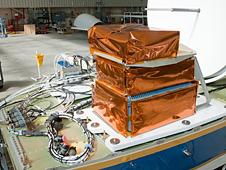 NASA Goddard's Cloud Physics Lidar electronics are installed in the upper area of NASA's Global Hawk unmanned aircraft just in front of the aircraft's communications antenna. (NASA / Tom Tschida) A consortium of scientists is in the early stages of preparation for a multi-year airborne science campaign to study the humidity and chemical composition of air entering the tropical tropopause layer of the atmosphere between eight and 11 miles (13 to 18 km) high. NASA's Airborne Tropical Tropopause Experiment, or ATTREX, will conduct this research over the Pacific Ocean from three locations in 2013 and 2014.

Studies have shown that even small changes in stratospheric humidity may have climate impacts that are significant compared to those of decadal increases in greenhouse gases. Predictions of stratospheric humidity changes are uncertain due to gaps in the understanding of the physical processes occurring in the tropical tropopause layer.

Led by principal investigator Eric Jensen and project manager Dave Jordon of NASA's Ames Research Center at Moffett Field, Calif., the scientists are integrating instruments onto one of NASA's Global Hawk unmanned aircraft and are verifying their operation during checkout flights from NASA's Dryden Flight Research Center at Edwards, Calif. 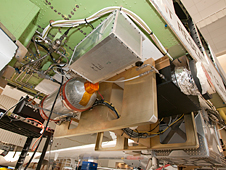 The Diode Laser Hygrometer developed by NASA's Langley Research Center is mounted in the Global Hawk's payload bay in preparation for an atmospheric study of humidity and chemical composition. (NASA / Tom Tschida) Eleven instruments are being installed in equipment racks on Global Hawk No. 872. The instruments were initially tested during an Oct. 20 flight in the restricted area over Edwards Air Force Base, Calif.

The second long-duration flight – which was the 50th flight of a NASA Global Hawk – was a 16-hour mission that occurred over the weekend of Nov. 5-6. A final Pacific Ocean flight was planned for Nov. 9 before the instruments are removed in mid-November.

The team consists of investigators from NASA, NOAA, three universities, the National Center for Atmospheric Research and private industry. The specialized instruments include a lidar, a spectrometer, a photometer, a chromatograph, a radiometer, hygrometers and several sensors that collect atmospheric data. 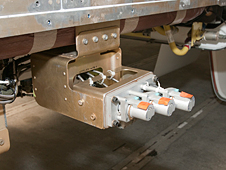 UCLA's Miniature Differential Optical Absorption Spectrometer, or mini-DAOS, is mounted in the payload area of a NASA Global Hawk in preparation for the Airborne Tropical Tropopause Experiment planned for 2013 – 2014. Below -- The mini-DOAS' three probes protrude through an aerodynamic fairing on the Global Hawk's fuselage during flight. (NASA / Tom Tschida) The science team will return to NASA Dryden in January 2013 to begin the task of science data collection. The study will continue with deployments to the Pacific region in January and June 2014. Scientists hope to use the data to improve global model predictions of stratospheric humidity and composition.

Jensen's proposal for ATTREX was competitively selected and is one of the first investigations in the new Venture-class series of low-to-moderate cost projects announced in May 2010. The Earth Venture missions are part of NASA's Earth System Science Pathfinder program. The small, targeted science investigations complement NASA's larger science research missions.