Satellites Illuminate Pollution's Influence On Clouds
Clouds have typically posed a problem to scientists using satellites to observe the lowest part of the atmosphere, where humans live and breathe, because they block the satellite's ability to capture a clear, unobstructed view of Earth's surface. It turns out, however, that these "obstructions" are worth a closer look, as clouds and their characteristics actually serve a valuable role in Earth's climate. That closer look is now available by satellites comprising the Afternoon Constellation, or A-Train. 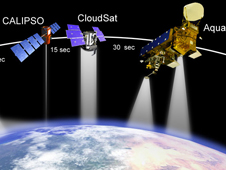 This artist's concept shows how the satellites composing the A-Train fly in formation to make near-simultaneous observations of Earth. Credit: NASA
> Full image Using data from instruments in a constellation of NASA satellites, scientists have discovered that they can see deep inside of clouds. The satellites are taking first-of-a-kind measurements, shedding new light on the link between clouds, pollution and rainfall.

Jonathan Jiang of NASA's Jet Propulsion Laboratory, Pasadena, Calif., and colleagues used these A-Train sensors to find that South American clouds infused with airborne pollution – classified as "polluted clouds" – tend to produce less rain than their "clean" counterparts during the region's dry season. Details of the findings will be presented today at the American Geophysical Union's 2008 Joint Assembly in Fort Lauderdale, Fla.

Discovery of the link between rain and pollution was possible due to near-simultaneous measurements from multiple satellites making up the string of satellites in the Afternoon Constellation, more commonly called the A-Train. "Typically, it is very hard to get a sense of how important the effect of pollution on clouds is," said Anne Douglass, deputy project scientist at Goddard for NASA’s Aura satellite. "With the A-Train, we can see the clouds every day and we're getting confirmation on a global scale that we have an issue here."

With the ability to distinguish between polluted and clean clouds, the team next used Aqua's Moderate Resolution Imaging Spectroradiometer to study how ice particle sizes change when aerosol pollution is present in the clouds. The team also used NASA's Tropical Rainfall Measuring Mission satellite to measure the amount of precipitation falling from the polluted and clean clouds. All three measurements together show the relationship between pollution, clouds and precipitation. 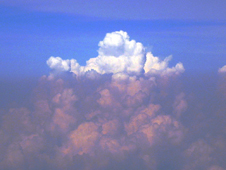 Pollution has long been observed to coexist with clouds, as seen here, but a group of NASA satellites are now revealing more about the complex relationship. Credit: Mark Schoeberl
> Larger image The team found that polluted clouds suppressed rainfall during the June-to-October dry season in South America, which is also a period of increased agricultural burning. During that period it was more difficult for the measurably smaller ice particles in aerosol polluted clouds to grow large enough to fall as rain.

This trend turned up seasonal and regional differences, however, and aerosol pollution was found, on average, to be less of a factor during the wet monsoon seasons in South America and in South Asia. Other physical effects, such as large-scale dynamics and rainy conditions that clear the air of aerosol particles, might also be at play, the researchers suggest.

"The complexity of interactions between aerosols and clouds pose difficult problems that no one satellite instrument can solve," said Jiang. "But when you put parameters from multiple satellites all together, you will find much more information than from a single instrument alone."

The five satellites – NASA's Aqua, Aura, CloudSat and CALIPSO and the French Space Agency's PARASOL – of the A-Train orbit only eight minutes apart and can be thought of as an extended satellite observatory, providing unprecedented information about clouds, aerosols and atmospheric composition.