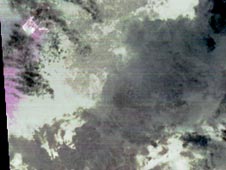 The magenta cloud shows an ash plume from the eruption of Halema'uma'u vent inside the Kilauea crater. Image credit: NASA/GSFC/METI/ERSDAC/JAROS, and U.S./Japan ASTER Science Team
›  Larger view
On the night of March 25, 2008, the Advanced Spaceborne Thermal Emission and Reflection Radiometer instrument on NASA's Terra satellite captured these thermal infrared images of Kilauea volcano on Hawaii's Big Island. Kilauea was active at two locations. At the summit, Halema’uma’u vent inside the Kilauea crater, continued to erupt an ash plume, seen as the magenta cloud on the left side of the first image. Some of the time this eruption has been dominated by sulfur dioxide gas and steam. The National Park Service has closed off the area due to extreme health hazards. On the second image, temperatures are color-coded in shades of red, from dark red (colder) to white (hotter). The Halema’uma’u vent appears as a white (hot) area. At the coast, the Thanksgiving Eve Breakout flow continues to build new land area as it enters the ocean (bright white area in lower right corner of image two).

With its 14 spectral bands from the visible to the thermal infrared wavelength region, and its high spatial resolution of 15 to 90 meters (about 50 to 300 feet), ASTER images Earth to map and monitor the changing surface of our planet. 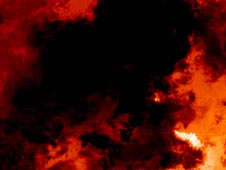 At the coast, the Thanksgiving Eve Breakout flow continues to build new land area as it enters the ocean, seen as the bright area in the lower right corner. Image credit: NASA/GSFC/METI/ERSDAC/JAROS, and U.S./Japan ASTER Science Team
›  Larger view ASTER is one of five Earth-observing instruments launched December 18, 1999, on NASA's Terra satellite. The instrument was built by Japan’s Ministry of Economy, Trade and Industry. A joint U.S./Japan science team is responsible for validation and calibration of the instrument and the data products.

To see views from a webcam at the summit, visit the U.S. Geological Survey page http://hvo.wr.usgs.gov/cam3/ .